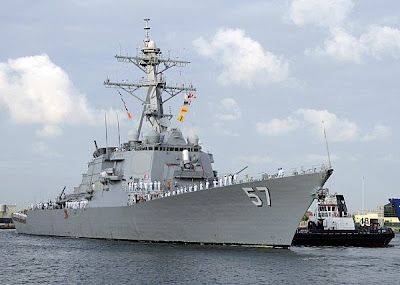 Mitscher returned after playing a crucial role in bolstering international relations with several countries, including Turkey, the Netherlands, France, Australia, Brunei, Maldives, Singapore and the Republic of the Philippines.

The ship departed Norfolk Jan. 27 to serve as the only U.S. ship in a Royal Navy amphibious task group. In addition to providing direct support to the task group as the air defense commander.

While sailing in the Mediterranean, Mitscher and the rest of the Taurus 09 Task Group combined forces with the Turkish Navy for Exercise Egemen 09. The exercise encompassed amphibious landing strategy supported by surface and air warfare tactics. Shortly after, Mitscher completed 400 hours of anti-submarine warfare training with the Taurus 09 Task Group during exercise Blue Toreador in the Indian Ocean.

As a mid-deployment stop, Mitscher pulled into the Changi Naval Base in Singapore May 6 to take part in the International Maritime Defense Exhibition and Conference (IMDEX) Asia 2009. IMDEX is a multinational exposition and top attraction for high-ranking officials from the international maritime arena. From May 12-14 the schedule consisted of exhibitions, receptions, exchanges and opportunities to gain new perspectives on current maritime security issues.

Mitscher along with USS Kidd (DDG 100) represented the United States in the warship display and provided ship tours to several hundred foreign military officials and guests. The display consisted of 22 warships from 15 different countries.

While many Sailors took advantage of the liberty ports to enjoy the local culture, several also chose to lend their efforts to community relations projects and distribute materials on behalf of Project Handclasp.

In the Maldives, members of the Mitscher crew personally delivered several pallets of hygienic and medical supplies to the Maldivian National Defense Force Headquarters to be distributed to hospitals throughout the islands. During Mitscher's port visit to Phuket, Thailand, Sailors volunteered at Home and Life Orphanage where they painted the orphanage's facilities and distributed donated goods from Project Handclasp to the children.

The Taurus 09 deployment enhanced interoperability and demonstrated the U.S. Navy and the Royal Navy's commitment to stability and international partners across the Mediterranean, the Arabian Sea, the Indian Ocean and the Far East. Mitscher is the second Arleigh Burke Class destroyer to complete a cooperative deployment of this type; USS Cole (DDG 67) previously completed the Orion 2008 deployment.