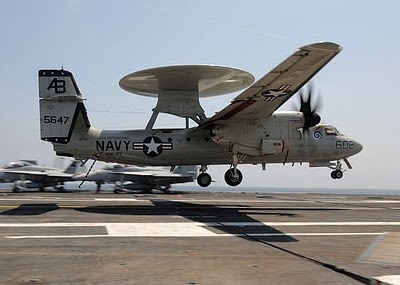 Flight deck certification is a requirement that every aircraft carrier must achieve prior to deploying with fixed-wing aircraft.

The certification proves that the crew of the ship is capable of safely launching and recovering aircraft and is prepared to prevent or combat flight deck mishaps.

The last time Enterprise conducted flight deck certification was prior to her last deployment in 2007.

"Air department Sailors eagerly awaited the arrival of aircraft during a long shipyard period, and to have aircraft back aboard is the culmination of the crew's two years of hard work," said Senior Chief Aviation Boatswain's Mate (Handling) (AW/SW) Michael E. Mappin, leading chief petty officer for Air department's V-1 division. "Every step of flight deck operations requires members of Air department, the air wing and the crew to be successful."

To safely recover a jet, many personnel are required. From the below-decks crew, to the culinary specialists, to the Bridge watchstanders, to the plane captain, it's a team effort.

Launching aircraft is no different.

The pilot of the aircraft must rely on many Sailors from the squadron and ship in order to complete a successful launch.

The flight deck is one of the most dangerous places in the world to work.

"So many things can go wrong and one misstep can bring catastrophic results," said Mappin. "Everyone is shaking the rust off, and with the limited time the air wing has had to practice with the ship, it's basically been a team project of training and learning," said Mappin. "Commander Naval Air Forces commended us on our job, and that we are clearly ready to operate."

"Enterprise has proven she is back in the fight," said Mappin.

Enterprise is underway for carrier qualifications in preparation for her work-up phase and 21st deployment.
at 5/16/2010 04:34:00 PM