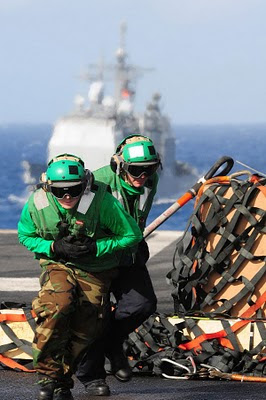 A total of 32 ships and five submarines from seven nations returned to JBPHH July 30-31 after successfully completing the exercise.

"RIMPAC has clearly achieved everything we set it up to do," said Vice Adm. Richard Hunt, commander, U.S. 3rd Fleet and commander, Combined Task Force. "We all met our training objectives and in doing so, as an international force, we have increased our interoperability, built upon our solid relationships, and improved the readiness, capability and capacity of the Pacific maritime forces."

The exercise was designed to increase the operational and tactical proficiency of participating units in a wide array of maritime operations by enhancing military-to-military relations and interoperability.

"I would like to express my appreciation to [the] U.S. Navy who supported this exercise, and our friends of all nations who gave us (a) great impression about their professionalism," said Yamashita.

"From the Canadian perspective, RIMPAC 2010 has been a terrific opportunity for all of our forces," said Canadian Navy Rear Adm. Ron Lloyd and the maritime component commander for RIMPAC.

"The performance of all the participants across the various task forces in the maritime component were superbly planned and brilliantly executed which speaks to the tremendous leadership of the task force commanders all the way down to the individual units. All of the participating nations should be exceptionally proud of how their forces represented their respective countries in an extremely dynamic, challenging and complex exercise," said Lloyd.

In all, 960 different training events were schedule and 96 percent were completed in all areas of the Hawaiian operations area – from Kaneohe Bay and Bellows, to the Pacific Missile Range Facility, to the Pohakuloa Training Area on the main island of Hawaii.

"It is this trust and confidence that we've developed amongst our international participants that is perhaps the most important aspect of RIMPAC. It is the one that is enduring," said Hunt. "It is this that will provide huge benefits in the realm of increased maritime security for years to come."

RIMPAC is the world's largest multinational maritime exercise. This year's RIMPAC exercise themed "Combined Agility, Synergy and Support," marked the 22nd exercise in the series that originated in 1971.
at 8/03/2010 07:50:00 AM