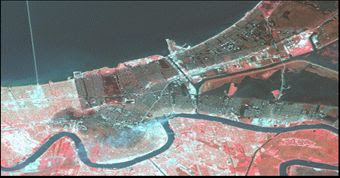 Eagle Vision provides rapid, high-quality imagery, such as this image taken in the aftermath of Hurricane Katrina, that can be used by disaster response workers. Officials from NASA and the U.S. Department of the Interior honored the Electronic Systems Center-managed Eagle Vision program with the 2010 William T. Pecora award during a Pentagon ceremony Feb. 15, 2011. (Eagle Vision image)

HNSCOM AIR FORCE BASE, Mass. (AFNS) -- An Electronic Systems Center program has been named the winner of a prestigious award presented by officials from NASA and the U.S. Department of the Interior.

The system consists of five deployable satellite downlink stations that collect and process near-real-time optical and synthetic aperture radar imagery from commercial satellite constellations. It ensures that U.S. forces or disaster responders have current, high-resolution imagery of an area of interest.

Eagle Vision imagery also can be exploited quickly, often within a few hours, he said. Processing time, though, ultimately depends on the amount of refinement -- adding in street names, etc. -- required by the end-user.

The program developed as a result of calls from warfighters, following Operation Desert Storm, for timely, unclassified imagery they could share with combat allies.

"However, the system has demonstrated phenomenal capability outside the combat zone," Captain Moll said.

The program also has aided many other natural disaster relief and humanitarian efforts, including responses to the California wildfires and to Hurricane Katrina. Outside the United States, the Eagle Vision team provided support to 19 different disaster relief efforts in six different countries during 2009.

Units also were deployed to Africa between 2004 and 2007 to collect commercial satellite imagery of Chad, Mauritania, Uganda and Niger to build a broad-area geospatial library for humanitarian support.

The award was presented to James G. Clark, Air Force director of Intelligence, Surveillance and Reconnaissance Innovations and deputy chief of staff for ISR. NASA Chief Scientist Waleed Abdalati and Anne Castle, Interior's assistant secretary for water and science, made the presentation.

"Eagle Vision is an excellent demonstration of how Earth observations from space support not only our soldiers and allies, but make a big contribution to our country's humanitarian efforts at home and abroad," Mr. Abdalati said. "One of NASA's primary missions, according to our founding charter, is expanding human knowledge of the Earth. Eagle Vision is an excellent example of the great achievements that can be realized in Earth science through inter-agency collaboration."

Officials from NASA and the Department of the Interior present individual and group Pecora Awards to honor outstanding contributions in the field of remote sensing and its application to understanding Earth. The award was established in 1974 to honor the memory of William T. Pecora, former director of the U.S. Geological Survey and undersecretary of the Department of the Interior.
at 2/18/2011 06:18:00 AM