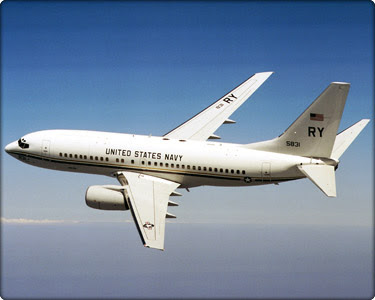 The VR-58 “Sunseekers” brought a new C-40A Clipper aircraft from the Boeing facility in Wichita, Kan. to its temporary home at NAS Jacksonville Jan. 31.

This is the 11th C-40A aircraft that the Navy has purchased as part of its plan to replace and retire its aging C-9B Skytrain fleet.

The C-40A is a modified Boeing 737-700 that provides almost twice the range and twice the payload of the C-9B, at a lower overall cost.

The platform transition process began in 2001, when the first C-40A was delivered to VR-59 at NAS/Joint Reserve Base (JRB) Fort Worth, Texas.

Since then VR-59, VR-58 and VR-57 have transitioned to the C-40A aircraft. The VR-56 “Globe Masters,” based at NAS Oceana, will be the next squadron to transition from the C-9B to the C-40A; a six-to nine- month process that begins in May.

“Because there is no Fleet Replacement Squadron for the C-40A, the 200 pilots, aircrew and maintainers from VR-56 will receive their C-40A training at VR-57, VR-58 or VR-59 during the coming months,” explained Cmdr. Chris Fordham, commanding officer of VR-58.

AWFC(NAC/AW) Deyaniris Santiago of VR-58, who was part of the crew that accepted the aircraft from Boeing, said, “I believe it will be easier to train VR-56 sailors on the C-40A than earlier aircraft because use of the latest technology allows greater reliability and enables faster troubleshooting.”

Santiago is currently experiencing both sides of training herself, as she is a C-40A load master instructor and is also training to qualify as a crew chief.

Chris Derby, of the TSM Corpora-tion, a civilian contractor who works with VR-58 sailors in maintaining the C-40A, said enthusiastically, “I love this job. I‘ve been with this aircraft as a crew chief, maintenance chief and now as a contractor. I came back to this aircraft specifically because it is a part of me.” Derby, a retired Navy chief, has over 10 years of experience with the C-40A since becoming a Clipper crew chief when VR-59 made the first transition in 2001.

“Mr. Derby probably has the most C-40A experience of anyone who works on this aircraft,” said Fordham. “He trained over 70 crew chiefs and approximately 250 maintenance personnel on the C-40A while on active duty. We are very fortunate and very grateful to be able to continue to leverage his expertise in training VR-58’s and VR-56’s sailors.”

The “Sunseekers” expect to maintain and fly the aircraft for about a year. Once VR-56’s new hangar is completed, aircraft 166695 and two other C-40A’s from VR-59 and VR-57 will be transferred to the NAS Oceana-based squadron.

The Naval Air Logistics Office in New Orleans, La, along with other fleet authorities schedules operational tasking worldwide.
at 2/10/2011 06:01:00 AM