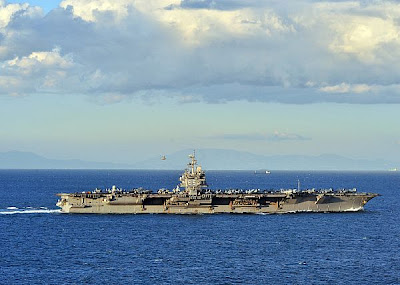 STRAIT OF GIBRALTAR (NNS) -- The deployed aircraft carrier USS Enterprise (CVN 65) and guided-missile cruiser USS Leyte Gulf (CG 55) successfully passed through the Strait of Gibraltar Jan. 31, bringing the ships from the Atlantic to the Mediterranean Sea as they continue to operate in the 6th Fleet area of responsibility.

With the ships' homeport in Norfolk, Va. now far behind, Sailors are busy conducting flight operations and cooperative missions with allies in the region in support of maritime security operations and theater security cooperation efforts.

The Strait of Gibraltar is a narrow strait which separates Europe and Africa by only seven miles at its closest point and connects the Atlantic Ocean to the Mediterranean Sea. The depth ranges from 980 to 3,000 feet, which makes it difficult to navigate a 90,000-ton warship.

Quartermaster 3rd Class Tom Sanborn, a quartermaster of the watch aboard Enterprise, said to successfully complete a transit through the strait, skill, planning and concentration are required by all hands.

"There's a lot of shallow water, and in some areas the land is less than five nautical miles from the ships on either side," said Sanborn. "There is no room for error."

The process of transiting the strait requires the quartermasters on a ship's bridge to take constant measurements of the ship's position, both electronically and manually by taking bearings and visually watching the distance from the land.

"The entire process usually takes several hours," said Sanborn. "We take bearings and make sure we're in deep enough water every two minutes, and we cross reference the data with what we see on our screens electronically."

The strait is dangerous to transit for other reasons including traffic from other ships. Sanborn said that quartermasters spend hours to prepare to make sure the charts are accurate and the equipment works to ensure a safe transit.

"We call sea and anchor detail before going through the strait, so our Deck department is standing by, ready to drop the anchor in case of an emergency," said Sanborn. "We only let our master helmsmen drive the ship during the transit."

Transiting important chokepoints takes the skill of multiple departments aboard the ships. The engineering departments must ensure all propulsion capabilities are operating perfectly in addition to many other duties.

The ships' security divisions and helicopter squadron provide physical security to the ships, and the safety departments ensure everyone mitigates risks. It's an all-ship effort for both.

The transit is important as a strategic statement as well, said Rear Adm. Terry B. Kraft, commander of Enterprise Carrier Strike Group. "Entering the Mediterranean in the shadow of the rock of Gibraltar is always symbolic to me," he said. "It sends a strong signal that the Enterprise Strike Group has arrived to operate and integrate with our partners in the region."

Chief Quartermaster (SW/AW) Jacob Lozano, Enterprise Navigation Department's leading chief petty officer, said the process of leaving the Atlantic Ocean and entering the Mediterranean Sea went smoothly because of the entire ship's hard work and professionalism.
"We have a lot of really well-trained Sailors on this ship," said Lozano. "But we only put our best people on watch for the transit."

Ensuring the freedom of navigation through vital sea lanes is a core responsibility of the Navy and has ensured that the 90% of goods that travel by sea are free to do so.