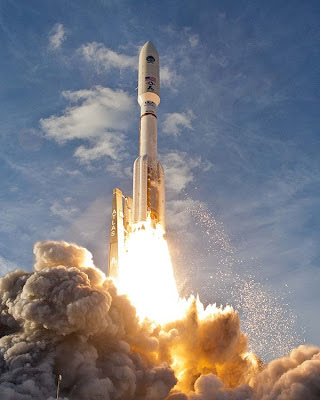 Born from the need for stable, 24/7 ship-to-shore communication that could be successful regardless of environments and geographical conditions, the Navy is responsible for providing narrowband satellite communication for the Department of Defense.

"MUOS' top requirements include capacity, coverage and link availabilities. It will provide 24 hours a day, seven days a week global coverage," said Navy Capt. Paul Ghyzel, MUOS program manager. "The ability for a warfighter to make a telephone call over a MUOS terminal and send data at 10 times more capacity than they can now will be a significant improvement."

For the Navy MUOS team, many of whom have spent years on the program, the successful launch is just the beginning of work to come. "We are very excited to see this milestone today. It's the end of one phase and the beginning of another," said Navy Cmdr. Jeff King, a MUOS systems engineer who worked on the program for three years.

King explained that upon separation from the launch vehicle the satellite will stay in a temporary orbital slot for initial testing.

"The satellite will spend the next several months in its geostationary orbit and be thoroughly checked out by the combined government and contractor team before being turned over for operational use."

Operational use, also known as initial operational capability, for the first MUOS satellite is expected in summer 2012. Control of the satellite will then be turned over to the Naval Satellite Operations Command in Point Mugu, Calif.

Ultimately, the MUOS constellation will consist of four satellites and an on-orbit spare. The system also includes four ground stations strategically located around the globe, which provide worldwide coverage and the ability to connect users wherever they are. The ground system transports data, manages the worldwide network and controls the satellites.

With today's narrowband communication system, users have to be stationary with an antenna up and pointed toward a satellite.

The MUOS constellation is expected to achieve full operational capability in 2015, extending narrowband availability well past 2025.

Today's launch was originally scheduled for Feb. 16 and again Feb. 22, both canceled and rescheduled due to unfavorable weather conditions.

The program is managed by the Navy's Program Executive Office for Space Systems, Chantilly, Va., and its Communications Satellite Program Office in San Diego.

"MUOS 1 became the heaviest payload ever launched by an Atlas rocket in more than 600 launches under the venerable booster's name, weighing nearly 15,000 pounds [6,804 kg].

"And to heave the craft into a lofty geosynchronous transfer orbit, the Atlas 5's largest, most energetic configuration—previously used to hurl space probes toward Jupiter and Pluto—was tapped for the mission with five forceful solid rocket boosters flanked around the vehicle.

"What's more, the launch also marked the milestone 200th flight for the dependable Centaur upper stage, which conducted three critical firings over the course of three hours to position MUOS 1 into the proper orbit to score a successful launch.

"The sophisticated MUOS system—to be fully assembled with four more launches over the next few years—was designed around the commercial third-generation cellular telephone architecture to substantially increase the number of users and amount of communications that can be routed to military forces. The satellites will ring the planet and provide capacity, availability and global coverage for mobile military communications like never before.

"From its eventual spot in geosynchronous orbit, matching Earth's rotation to hover in a parking spot 22,300 miles [35,888 km] up, the expansive footprint of MUOS 1 will cover a huge swath of the planet to serve ships, submarines, aircraft, land vehicles and terminals in the hands of troops.

"Initial testing of the craft will be performed later this spring over the mid-Pacific Ocean in view of a Hawaiian ground station. However, the final operational position in space and what geographical area of the globe the craft will cover hasn't been chosen yet."

"MUOS will offer 10 times greater communications capacity to the mobile warfighter over the Navy's current generation of Ultra High Frequency Follow-On spacecraft to relay narrowband tactical information such as voice calls, data messaging, file transfers and email on rates of up to 384 Kilobits per second."

"At the heart of the MUOS satellite's communications payload are two gold mesh antenna reflectors, built by Harris Corp. Coverage to legacy users will transmit through a 17.7-foot [5.4-m]-diameter reflector on the bottom of the craft and the advanced, multi-beam features of MUOS to significantly increase the transmission capacity over the Navy's previous satellites will use a large 46-foot [14.0-m] reflector atop the satellite."

"Ground controllers established contact with the satellite to begin what's expected to be a three-month process of maneuvering MUOS 1 into geosynchronous orbit, deploying its power-generating solar arrays to span more than 90 feet, unfurling a pair of umbrella-like antenna reflectors on boom assemblies and fully checking out the onboard communications equipment.

Eight orbital raising burns are expected over the next 10-14 days, followed by the test program that Lockheed Martin will perform, Ghyzel said. The military will take control of the satellite in about 90 days to conduct its own acceptance evaluation before the craft enters service."