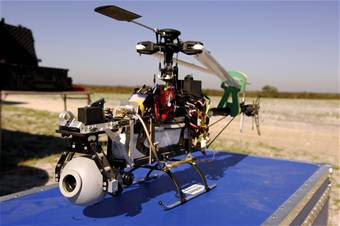 Editor's Note: Frequencies and callsigns associated with this exercise are at the end of this article. The RF spectrum profile below updated at 0952 EDT 20 April 2007

4/19/2007 - AVON PARK, Fla. (AFNEWS) -- As the convoy travels down the dusty path, the lead Humvee's Joint Terminal Attack Controller zeroes in on a potential target 1,500 meters in front of him. He sends the coordinates to the waiting aircraft above.

"Target is verified JTAC, expending munitions." The aircraft releases its munitions precisely on target, decreasing collateral damage and allowing the convoy to continue on, unharmed.

Although not an actual account, scenarios like this one would not be possible in theater without technology such as the Remotely Operated Video Enhancement Receiver, or ROVER, and Venom, a remote-controlled, laser designator rangefinder telescoping mast system. Air Force, Marine Corps and Canadian Air Force JTACs are training on these and other battlefield technologies during Atlantic Strike V April 14-20 at the Avon Park Air Ground Training Complex in Avon Park, Fla.

ROVER can receive video and telemetry data from manned aircraft, remote-controlled unmanned aerial vehicles and the Venom system to display on a laptop or television monitor. The receive-only terminal can receive most Intelligence, Surveillance and Reconnaissance video from C, L and KU Band frequencies. This capability allows ground commanders to see around corners, over hills or on top of buildings -- providing critical battlefield situational awareness and targeting capability.

"The ROVER terminal gives JTACs the same aerial picture the aircraft sees," said Lisa Diamanti of L3 Communications, the company responsible for designing the ROVER system. "The JTACs on the ground need to see this picture to positively identify targets. This cuts down the talk-on-target time (from hours) to 10 minutes or less."

Before ROVER, JTACs had to have their eyes on the target and relied on verbal communication between themselves, aircraft and the Air Support Operations Center. JTACs would provide the target, which the ASOC then confirmed before the aircrew could execute.

"The ability for JTACs to operate without (having to contact) forward (command and control) is great," he said. "It also expands my ability to do my job without putting myself in harm's way, because it gives me a bird's-eye view of the area instead of just line of sight. For example, I can spot a target individual and instead of giving away my position, I can watch (on the ROVER) the receiving aircraft follow him to a point a safe distance from me before engaging."

Northrop Grumman's Venom system will give JTACs even more of a chance for survival.

"With the growing need for up-armored Humvees, the military needed a system that would allow its occupants to stay under that armor while identifying targets," said Bob Raulerson, marketing manager for Northrop Grumman. Venom uses a Lightweight Laser Designator Rangefinder on a universal, stabilized platform that mounts on top of the vehicle and enables military members to observe targets during the day or night. The versatile system can be mounted on a mast that can be attached to any vehicle, Mr. Raulerson said.

If fitted with a ROVER transmitter, the Venom can send its images to ROVER systems, adding a line-of-sight image to the aerial image a JTAC receives from an aircraft. When in laser tracking mode, Venom also allows units to identify and lock on to a target while moving out of the area before the military members are discovered.

"I have also been told that some forward-operating bases are benefiting from mounting Venom on top of a building while the operator remains inside, out of harm's way," Mr. Raulerson said. "All in all, Venom will do more to ensure warfighters return home safely."

During a scenario involving a high-value target, the Army convoy commander parked the Venom system outside a village, adding another vantage point to his maneuvers. The convoy was able to engage enemy forces on the other side of the village, while monitoring buildings to avoid an unexpected flanking maneuver. The Venom system also allowed the ground commander to find a hidden sniper position -- a position only visible from the reverse angle the Venom system provided.

The mounting platform being tested at Atlantic Strike V is scheduled to be used in the U.S. Central Command area of responsibility in August.

Here is a list of freqs/designators/callsigns that have been reported and are associated with Atlantic Strike V.