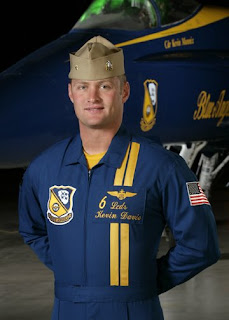 The Navy has officially announced that LCDR Kevin J. Davis (Callsign Kojack) was killed in an accident that occurred yesterday at MCAS Beaufort, SC. LCDR Davis flew the #6 opposing solo aircraft, as I previously reported, during Blues performances.

The aircraft crashed during the final minutes of an air show at Marine Corps Air Station Beaufort, S.C., at approximately 4 p.m. EDT, April 21.

The pilot of the jet was joining the Delta formation for the final maneuver of the aerial demonstration when the mishap occurred. It was his second year on the team, and first year as a demonstration pilot.

The other five Blue Angel jets were not involved in the incident and landed safely moments later.

The crash occurred approximately three miles outside the air station in the vicinity of Pine Grove Rd. and White Pine Rd. One civilian on the ground reported minor injuries and was transported to Beaufort Memorial Hospital. Some houses in the area received damage, the extent of which is unclear at this time.

The cause of the accident is currently under investigation. And the Blue Angel Performance Schedule has been suspended.

LCDR Kevin J. Davis Bio
Lieutenant Commander Kevin Davis was a native of Pittsfield, Massachusetts, and graduated from Reading Memorial High School in 1992 where he played football and was active with the Civil Air Patrol. He attended Embry Riddle Aeronautical University, earning a Bachelor of Science degree in Aeronautical Science with honors in 1996.

Kevin reported to Naval Air Station (NAS) Pensacola, Florida, for Officer Candidate School and aviation indoctrination in September 1996. He completed primary flight training at NAS Corpus Christi, Texas, and transferred to NAS Meridian, Mississippi, for intermediate and advanced flight training. While there, he flew the T-2C Buckeye and TA-4J Skyhawk, and received his wings of gold in June 1999.

Kevin reported to Fighter Squadron 101 (VF-101) at NAS Oceana, Virginia, for training in the F-14 Tomcat and was the “Top Stick” in his class. In July 2000 he reported to the VF-11 “Red Rippers” where he completed deployments aboard the aircraft carriers USS Dwight D. Eisenhower (CVN 69) and USS John F. Kennedy (CV 67). While with the “Red Rippers,” Kevin served as the airframes/corrosion branch officer, air-to-ground training officer and head landing signals officer. His deployments included extended operations in the North Arabian Sea and Arabian Gulf in support of Operation Enduring Freedom.

In July 2003, Kevin transitioned to the F/A-18 Hornet through Strike Fighter Squadron 125 (VFA-125) at NAS Lemoore, California, and then reported to the Fighter Composite Squadron (VFC-12) “Omars,” stationed at NAS Oceana, Virginia. While at VFC-12, Kevin served as a Navy adversary pilot providing valuable air-to-air training for fleet squadrons. In December of 2004, Kevin graduated from the United States Navy Fighter Weapons School (TOPGUN) as an adversary pilot. During his tour at VFC-12, Kevin worked as the schedules officer, legal officer, FRS/SFARP officer and assistant operations officer.

Kevin joined the Blue Angels in September 2005. He accumulated more than 2,500 flight hours and 200 carrier arrested landings. His decorations included the Air Medal, two Navy and Marine Corps Achievement Medals, and various personal and unit awards.
at 4/22/2007 07:39:00 AM