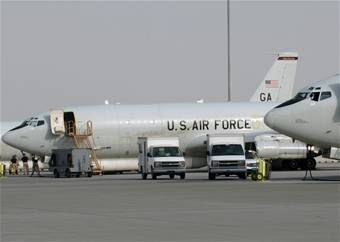 Beginning on Jan. 16, 2003, the JSTARS aircraft crews flew missions for Operation Southern Watch and then OIF. They were first deployed to Prince Sultan Air Base, Saudi Arabia and RAF Akrotiri, Cyprus, and in May 2003 were relocated to the 379th Air Expeditionary Wing.

Flying more than a dozen command and control, intelligence, surveillance and reconnaissance missions per week, with an average of 10-12 hours per mission, the JSTARS have maintained a constant presence in the skies over Iraq.

"Reaching this milestone shows the reliability, sustainability and dependability of this low density/high demand platform and the commitment of the aircrews, maintainers and support personnel to meet combatant commanders' C2ISR requirements for the long haul," said Lt. Col. Joseph Richardson, 128th EACCS director of operations.

The JSTARS primary mission is to provide theater ground and air component commanders with ground surveillance to support attack operations and targeting that contributes to the delay, disruption and destruction of enemy forces.

The unit flies E-8Cs, which are modified Boeing 707-300 series commercial airframes extensively remanufactured and modified with the radar, communications, operations and control subsystems required to perform its operational mission. The unit has 17 E-8Cs valued at $366 million each.

"The E-8C is a theater level C2ISR asset that provides highly mobile, flexible, and survivable wide area ground surveillance with the ability to detect and track moving and stationary ground targets, day or night, in almost any weather," Colonel Richardson said.

The JSTARS organization, assigned to the 116th Air Control Wing, Robins AFB, Ga., is unique because it's the only blended "Total Force" wing in the Air Force.

"Our home wing is composed of both active duty and Air National Guard Airmen as well as our U.S. Army soldiers, blended into a coherent fighting force," said Colonel Richardson. "This flying achievement represents the total commitment of our blended, joint aircrews as well as the dedicated professional support of our maintenance personnel and our computer support professionals."

Many crew members have deployed several times in support of the JSTARS mission and have watched the flight hours accumulate.

Since 2003, I've flown over 75 missions in support of OIF/OEF," said Maj. Dennis Dickerson, 128th EACCS mission crew commander. "The JSTARS is still relatively new to the inventory, and we are literally finding out more capabilities on a daily basis. As these capabilities are discovered, the demand for our platform has skyrocketed. Thus, our Airmen can deploy up to 180 days a year and fly over 720 combat sortie hours in that time."
at 4/10/2007 07:55:00 AM