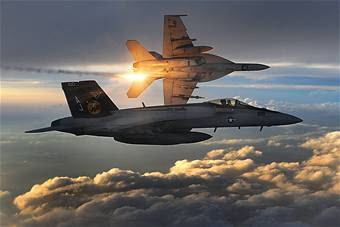 FORWARD OPERATING BASE ORGUN-E, Afghanistan (AFNS) -- Minimizing collateral damage is at the forefront of military leader's priorities in Afghanistan. Those leaders depend on the teamwork between pilots and Air Force joint terminal attack controllers to ensure innocent civilians and their property aren't put at unnecessary risk.

By combining laser-guided munitions with constant communication between JTACs on the ground and pilots in the sky, collateral damage is kept at the lowest possible level.

The JTACs serve as liaisons between Army ground commanders and pilots by planning, communicating and coordinating close-air support to eliminate enemy threats.

"These efforts provide the ground commander a valid means to neutralize a target while preserving the lives of friendly forces and the civilian populace," the 20-year JTAC added.

While the JTACs rely on their tools, the trust between them and the pilots serves as one of the most important aspects of close-air support.

"One major component of the relationship between the JTAC and the [aircrew] is the trust and understanding of expectations," said Capt. Daniel Wester, 34th Expeditionary Bomb Squadron weapons system officer. "The JTAC must trust that the aircrew is going to strike precisely when and where needed in order to save friendly lives. The aircrew in turn must trust that the JTAC passed [on] the right coordinates, properly assessed the threat and mitigated collateral damage to the [maximum] extent he can.

"This expectation of professionalism results from the trust that forms from the life-saving interaction between aircrew and JTACs," he said.

The pilots know to trust the JTACs because of the exhausting measures they go through before requesting kinetic weapon support.

"We do not act on a sole source of intelligence; we collect as much data as we can gather before employing anything," said Tech. Sgt. Harvey Wagenmaker, 2-506th Battalion Air liaison officer. "We have to have enough evidence to determine the [targets] to be hostile."

The JTACs also estimate the potential collateral damage to ensure there are no structures, such as schools or mosques that can be affected by the bombs impact.

"A common misconception is that bombs create a lot of uncontrolled damage," said Sergeant Wagenmaker, the 13-year JTAC deployed from Fort Campbell, Ky. "But with precision-guided munitions, our risk-estimated distances and the information we have on the munition's blast radius, unless something goes severely wrong, the bomb will hit it's intended point of impact."

It's that sort of confidence in their profession that gives military leaders the trust in their Airmen to accomplish their mission while minimizing collateral damage.

"It's a priority every time we drop [munitions]," Sergeant Wagenmaker said. "The bottom line is we go through extraordinary measures to ensure there are no civilian casualties."
at 12/30/2008 08:34:00 AM