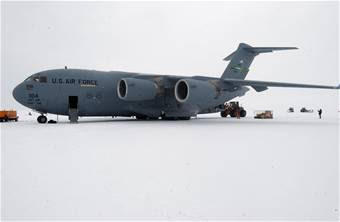 Thirty bundles of fuel and other supplies were delivered by the members of the from the 446th and 62nd Airlift Wings from McChord Air Force Base to a scientific camp in the province, one of the most remote locations on earth.

"The success of this mission was a full total force partnership," said Chief Master Sgt. James Masura, deployed from the 446th AW as the 304th EAS superintendent. "We combined experts from the active duty, Reserve, civilians, contractors, National Science Foundation and the New Zealand Defense Forces. This small team worked extremely hard to ensure we put the cargo on the surface to ensure completion of this groundbreaking science project."

Capt. Joe O'Rourke, a 7th Airlift Squadron pilot deployed to Operation Deep Freeze helped develop the AGAP missions. He said the airdrop is a quick and efficient way to deliver resources to the camp -- better than any other platform available.

"Without our delivery of that fuel, these scientists who are trekking out to the AGAP campsite from the South Pole would have had to carry that fuel with them, or a second trip would have been necessary from McMurdo Station over land carrying literally thousands of gallons of fuel," he said.

In just three hours, Airmen delivered what would take days or weeks to accomplish through any other means, the captain said.

"The C-17 has revolutionized Antarctic logistics and this is another example of how we've leveraged our strategic airlift capability to support the National Science Foundation's tactical requirements," said Lt. Col. Jim McGann, the 304th EAS commander. "Airdropping the fuel enables critical global climate research to continue in remote locations. Without it, the project (involving six countries at a cost of more than $40 million) would fail. And support like this, even in the most hostile environment on the planet, is what McChord (AFB) does best."

A total of four airdrops have now delivered supplies to the scientific campsite on the north side of the Gamburtsev province, a chain of mountains the size of the European Alps buried under five kilometers of ice.

Scientists believe the Gamburtsev Mountains are the point of origin of the East Antarctic ice sheet and may be home to some of the oldest ice on the continent, Captain O'Rourke said.

"They are trying to determine the nature of that ice and also the nature of the geophysical event that caused the uplift of the mountains, whether it was volcanic, tectonic, or otherwise," he said.

The U.S. military's support to Operation Deep Freeze began in 1955. Through this program, McChord AFB Airmen provide airlift support in an extremely adverse environment, sometimes landing the C-17 on a 6-foot thick ice runway to deliver supplies to the National Science Foundation from August through February each season.