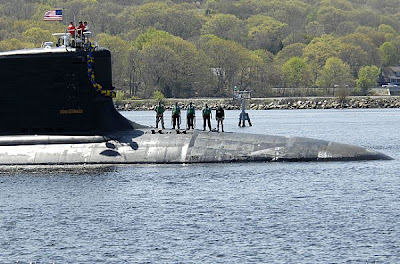 "SUBPAC is thrilled to be welcoming the most technologically advanced submarine in the U.S. inventory to our ohana," said Rear Adm. Douglas McAneny, commander, Submarine Force U.S. Pacific Fleet

"Virginia-class submarines like USS Hawaii are the first to be designed post-Cold War to excel in the littorals, while maintaining the ability to conduct open-ocean operations, which will directly support my ability to meet and defeat threats to maritime security in the Pacific."

Commissioned May 5, 2007, Hawaii was the third Virginia-class attack submarine constructed and the first submarine to be named after the island state. Her crew will represent its namesake state, as they continue to build upon already sustained relationships with multinational partners in the Asia-Pacific Region.

Adm. Robert Willard, commander, U.S. Pacific Fleet, was eager to take advantage of the capabilities USS Hawaii will bring to the Pacific.

"USS Hawaii represents our very newest technologies and advancements in submarine design and capability," said Willard. "These boats contribute to a great deal of what we do to maritime security, to the employment of our special operations forces and all dimensions of warfare in the Pacific."

"As governor, I am elated the USS Hawaii (SSN 776) will make Pearl Harbor [her] home," said Lingle.

"This fabulous journey began with the keel laying in 2004, continued with the christening in 2006 and the proud day of commissioning in 2007. As the submarine's sponsor, watching our submarine be 'brought to life' has been an honor and a privilege. Now, to have our namesake submarine call Hawaii home is the culmination of an important and exciting venture. I look forward to welcoming the entire crew and the families to our state."

Measuring 377-feet long, weighing 7,800 tons when submerged and with a complement of more than 130 crew members, Hawaii is one of the Navy's newest and most technologically sophisticated submarines.

Hawaii conducted her first operational deployment prior to its post-shakedown availability, demonstrating the Virginia-class program's capability to immediately support the fleet.

Hawaii's U.S. Sen. Daniel Inouye reflected on the importance of having USS Hawaii in the Aloha State.

"It is indeed fitting that the first Virginia-class submarine to arrive into Pearl Harbor will be the USS Hawaii," said Inouye.

"I have no doubt that the men and women of the shipyard will ensure that she is fit and remains fit to fight today and in the years to follow. The USS Hawaii will be a national security beacon throughout the Asia-Pacific region. I wish its crew Godspeed and calm seas."

Hawaii is a state-of-the-art submarine capable of supporting a multitude of missions, including anti-submarine warfare, anti-surface ship warfare, strike, naval special warfare involving special operations forces, intelligence, surveillance and reconnaissance, strike group support, and mine warfare. She will join the force of 15 Los Angeles-class submarines presently homeported in Pearl Harbor.
at 12/06/2008 09:01:00 AM