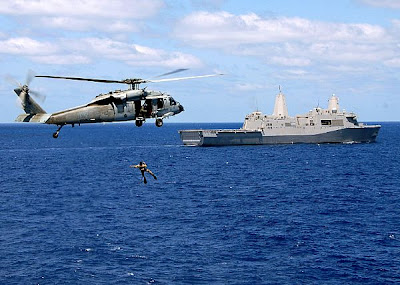 Participants arrived in four landing craft, air cushioned (LCAC) amphibious hovercrafts to demonstrate an amphibious landing and set up security perimeters for additional troops and vehicles to come ashore. The demonstration was part of the annual multinational partnership-building exercise known as UNITAS.

UNITAS Gold is the commemorative exercise for the 50th iteration and runs April 20 - May 5 off the coast of Florida. UNITAS is designed to foster mutual cooperation between participating militaries and develop their capability to respond in a unified manner to a wide variety of maritime missions. The beach assault was a culmination of more than three months of planning, coordination and training between participating nations.

"Last week, when we were at Camp Blanding we were working on shooting skills, patrolling formations and proper ways to employ weapons," said Lance Cpl. Jeremiah Barnes, a radio operator with Echo Company, 2nd Battalion, 24th Marines. "The biggest obstacle is the language barrier since the Brazilians here speak Portuguese and the Peruvians speak Spanish."

While waiting to board the LCAC, the marines and soldiers sat together, trading stories and preparing their weapons for the mock beach assault. Where communication proved difficult, U.S. Sailors and Marines acted as translators.

"We have been training at Camp Blanding to learn how to get down from helos, combat shooting and urban combat with all different nations," said 1st Technician Julio Rodriguez, 1st Battalion, Infanteria De Marina De Peru. "It is good training because everybody learns from everybody from Latin America, South America and the United States. That way we can all prepare to stand together against any threats."

As two hovercraft pulled out of the well deck of the amphibious transport dock ship USS Mesa Verde (LPD 19), two more pulled in to embark the remaining marines and soldiers. Meanwhile the dock landing ship USS Ashland (LSD 48) deployed marines aboard amphibious assault vehicles to follow up the multi-national assault.

The at-sea portion of the exercise continues off the coast of Florida. On May 4, the partner nation ships will return to Naval Station Mayport to prepare for closing ceremonies held May 5. 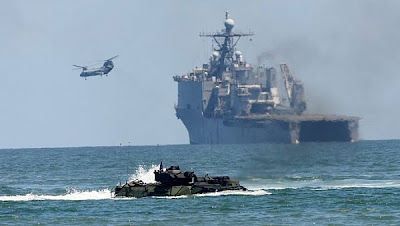