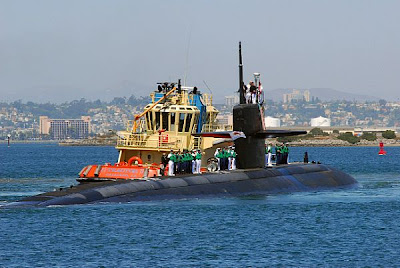 This journey comes after a three-year restoration period at the Puget Sound Naval Shipyard and Intermediate Maintenance Facility (PSNS and IMF) in Washington state.

The Los Angeles-class fast-attack submarine collided with an uncharted undersea mountain Jan. 8, 2005, and was placed in the dry dock facility for repairs after a 5,600-nautical mile open ocean transit from Apra Harbor, Guam to PSNS and IMF.

After leaving the dry dock facility April 7, the submarine successfully completed sea trials and began her transit toward San Diego.

"Sea trials went well and the San Francisco is in great material condition. We put her through a rigorous, comprehensive set of tests and she performed superbly," said San Francisco Commanding Officer, Cmdr. Nathan Martin.

The change of station to San Diego is a result of the Navy's plan to maintain 60 percent of the submarine force in the U.S. Pacific Fleet, as outlined in the 2006 Quadrennial Review.

"It's been a lot of hard work up in Washington, but I'm really glad that we're down here [in San Diego]," said Lt. Paul Carnan, San Francisco's quality assurance and electrical assistant officer. "A lot of other guys on the boat put a lot of effort forward and I think it shows. We had successful sea trials and we're all really glad to be down here and to be operational now."

"The crew had done an outstanding job of preparing themselves, their families, and the ship for San Francisco's return to service and change of homeport," Martin said. "They worked very hard to make this process and the ship successful. Their dedication and determination have been awe-inspiring. I couldn't be more optimistic about the future of San Francisco and her exceptional crew."

This submarine is the third U.S. Navy ship to carry the name San Francisco.