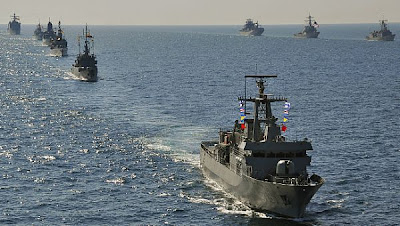 "Through the years, UNITAS has evolved to fit the landscape, needs, and mutual naval and maritime interests of the Americas and Caribbean," said Rear Adm. Joseph D. Kernan, Commander, U.S. Naval Forces Southern Command (NAVSO) and U.S. 4th Fleet. "As we move forward together, I am confident that future opportunities to work with our partners will not only strengthen our ability to operate together and provide for our nation's security but will also build personal and professional respect and friendships."

For 50 years, UNITAS has served as the primary maritime security engagement exercise among the militaries of the Western Hemisphere.

During the two-week exercise lasting from April 20-May 5, the United States and partner nations will train together in a realistic scenario-driven training environment featuring live-fire exercises, undersea warfare, shipboard operations, maritime interdiction operations, air defense and surface warfare, amphibious operations, electronic warfare, and special warfare. More than 30 ships, two submarines and 50 aircraft from the U.S. and participating navies are involved.

"This isn't something we have an opportunity to do quite often," said Canadian Army 1st Lt. Michael Faber of Alpha Company, 3rd Battalion, Royal 22nd Regiment. "The Canadian forces are very much arranged towards international partnerships and joint operations. UNITAS provides us a chance to practice working on our basic operational skills with people of other countries."

Faber also said UNITAS helps provide his team with the experience they need to be ready for almost any real-world operation.

During the exercise, Sailors, Marines and Coastguardsmen have the opportunity to train side-by-side with Latin American navies in a high-tech environment using state-of-the-art equipment. The relationships that develop from this exercise will help to foster cooperation and understanding between participating Navies.

A member of the Brazilian marines, Private Renan Gabriel said he is grateful his unit was selected to participate in this exercise. He said the differences between American and Brazlian operational procedures are almost non-existent.

"There are little differences between our two forces," said Gabriel. "We have identical fast rope and amphibious operation instructions."

"It's quite amazing," said Ship's Serviceman Seaman Philip Kozloff, a ship store attendant on board amphibious transport dock ship USS Mesa Verde (LPD 19). "It's great to meet other people from different countries and learn their customs or culture. It helps build our relationships with them abroad."
at 4/25/2009 06:55:00 AM