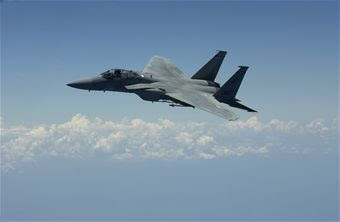 WASHINGTON - As the excitement builds in the minutes before the Super Bowl kickoff, four Air National Guard F-15 Eagle fighter jets will scream over Miami's Sun Life Stadium in a dramatic show of military support for the big game.

After the pilots land at nearby Homestead Air Reserve Base, a Miami-Dade police helicopter will whisk them back to the stadium, where they'll be introduced to the crowd, Bittner said.

The Super Bowl flyover is a first for the Air National Guard. The wing has done flyovers for other National Football League events, most frequently over Jaguars games near its Jacksonville International Airport base. But Bittner said there's a special panache that comes with flying over the big daddy of football games.

"It's a huge honor," he said, calling it a recognition of the wing's impressive operational readiness posture, and its 24/7 mission of being ready to scramble at a moment's notice to protect U.S. air space.

The flyover is just part of the military support being provided as the New Orleans Saints and Indianapolis Colts do battle during Super Bowl XLIV.

The Armed Forces Color Guard from the Military District of Washington will kick off that support, marching onto the field before the game to present the colors, accompanied by two drummers from U.S. Air Force Band.

Meanwhile, as more than 75,000 fans enjoy the sold-out game, military forces will be at work behind the scenes, supporting civil authorities to maintain security in and around the stadium and in the skies overhead.

Air Force Col. Randy Spears, commander of the 601st Air and Space Operations Center, called the mission an extension of the eagle-eyes his airmen provide every day. "The men and women of this AOC monitor the skies 24/7, 365 for the contiguous United States, and Sunday's special event is another part of our mission set," he said.

In addition, the Florida National Guard's 44th Civil Support Team will be on the ground, poised to support civil authorities, as required. The 40-member team, a mix of soldiers and airmen, is trained respond to any emergency situation, including those dealing with weapons of mass destruction, said Air Force Lt. Col. Ron Tittle, a Florida National Guard public affairs officer.

As in recent years, about 40 wounded Marine Corps warriors will be enjoying the game in person, courtesy of tickets donated by the Cleveland Browns.

Meanwhile, thousands of U.S. servicemembers will be watching, too, either at home or overseas, via Armed Forces Network broadcasts.
at 2/05/2010 02:43:00 PM