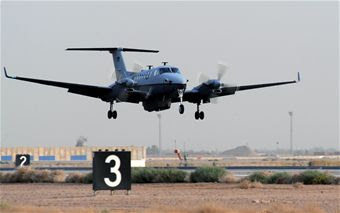 The MC-12 program took off in the fall as Airmen flew the first combat mission in the intelligence, surveillance and reconnaissance aircraft that supports coalition and joint ground troops in operations Iraqi Freedom and Enduring Freedom.

"A year ago the commander and I were learning how to start the new aircraft, and now the program just flew its 2,000th mission," said Capt. Ryan Woodman, a 362nd ERS mission pilot. "Given what this program accomplishes for the troops on the ground, it is a great feeling. We are the eyes in the sky for those guys. We are able to communicate and help them with their mission on the ground."

The MC-12, which allows the crew to support the ground troops, is a tactical ISR aircraft. The plane is operated by two pilots in the front of the fixed-wing aircraft and two enlisted members who gather intelligence by operating a sensor, a camera, located on the bottom of the plane. Having people in the aircraft allow adjustments to be made quickly. The adjustments allow a quick dissemination of information.

"As the signals operator, my job is to locate high value individuals and coordinate with the sensor operator to put the intel together," said Senior Airman Candise Woods, a 362nd ERS signals intel operator. "We are able to provide an angle of intel that other forces can't provide. We are providing real-time information to the ground forces."

Junior ranking Airmen in the MC-12 program have a lot of responsibility for this mission.

"Our junior Airmen are constantly in situations where they (must) give correct info in a matter of seconds," said Lt. Col. Phillip Stewart, the 362nd ERS commander. "Their decisions could mean the difference between life and death to the Soldier, Marine or Airmen on the ground. In a split second they have to be able to decide if the guy they are looking at is holding a shovel or a rifle and then transmit it to the ground. They perform under this pressure exceptionally well."

For the last nine months, the MC-12 mission has provided intelligence that has no doubt eased the minds of the security forces members patrolling villages, but it has also contributed to the arrest and prosecution of several dozen wanted individuals, and discovered multiple weapons caches and IEDs.
at 3/24/2010 12:55:00 PM