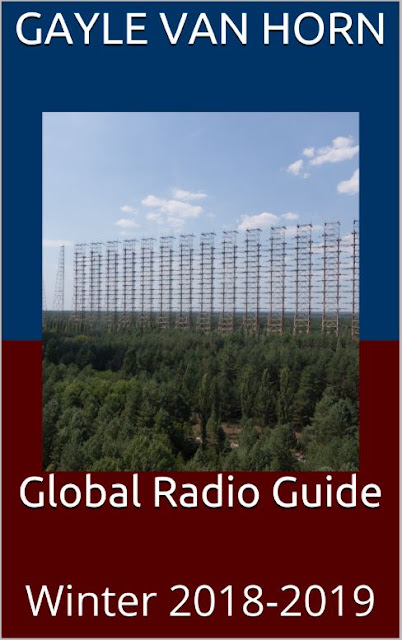 Once again, Global Radio broadcasters have moved to the front lines as the world’s major superpowers enter a new Cold War. As tensions heat up in the world’s hotspots such as eastern Europe, the Ukraine and Baltic States, the Middle East, and East Asia, you can follow international events on the radio, but you need an accurate and comprehensive radio guide to hear it.

If you want to get in on the action, then this Amazon 'electronic' book is your ticket to travel the Global Radio bands. The heart of this publication is a 24-hour station/frequency guide with Winter 2018-2019 schedules for selected medium wave and all known longwave/shortwave radio stations.

This unique resource is the only radio publication that has by-hour schedules that includes all language services, frequencies and world target areas for over 500 broadcast stations. It has a listing of DX radio programs and Internet websites addresses for many of the stations listed in the book. There are also listings for standard time and frequency stations, and even a few intriguing spy numbers station listings.

New in the 11th edition of the GRG is a feature, The Battle of the Airwaves in Cuba by Gayle (W4GVH) and Larry (N5FPW) Van Horn. This comprehensive feature covers the historic as well as an ongoing war over the airwaves between the U.S. and Cuba. Included are listings of AM/FM/Shortwave broadcast stations in Cuba, US stations beaming to Cuba and an extensive listing of Cuban Internet broadcast audio feeds.

Other authors with feature articles in this edition include The Spectrum Monitor’s Fred Waterer, from St. Catharines, Ontario, Canada, with a feature on winter radio programming and shortwave broadcast authority Hans Johnson with an update on DRM broadcasting worldwide.

Spectrum Monitor e-zine columnist and feature writer Larry Van Horn has a feature on Who’s Who in the Shortwave Radio Spectrum that will assist the reader in monitoring Global Radio activity outside the broadcast radio spectrum. This article also includes an updated Teak Publishing HF 1000+ non-broadcast frequency list.

The 11th edition of the Global Radio Guide e-Book (electronic book only, no print edition available) is available worldwide from Amazon and their various international websites at https://www.amazon.com/dp/B07L3RYTPG.

The price for this latest edition is US$8.49. Since this book is being released internationally, Amazon customers in the United Kingdom, Germany, France Spain, Italy, Japan, India, Canada, Brazil, Mexico and Australia can order this e-Book from Amazon websites directly servicing these countries. Customers in all other countries can use the regular Amazon.com website to purchase this e-Book.

Global Radio listeners are routinely entertained with unique perspectives to events, music, culture, history, and news from other countries that you won’t see or hear on your local or national broadcast channels. Global Radio broadcasts are not restricted by country borders or oceans and can travel thousands of miles, reaching millions of listeners worldwide, now in over 300 different languages and dialects. You do not need to own a shortwave radio to monitor many of these global radio broadcasts.

Listeners can easily hear shortwave broadcast stations from China, Cuba, Egypt, France, Germany, India, Iran, Japan, New Zealand, North/South Korea, Saudi Arabia, Taiwan, Turkey, United Kingdom, United States, Vietnam, and many other counties. If you have a shortwave radio receiver or Internet connection, and this unique radio resource, you will know when and where to listen to your favorite radio broadcast station.

The new Global Radio Guide e-book will have wide appeal to amateur radio operators, shortwave radio hobbyists, news agencies, news buffs, educators, foreign language students, expatriates, or anyone else interested in listening to a global view of world news and major events as they happen.