The extent of the debris cloud created by the destruction of the Fengyun-1C meteorological satellite on January 11, 2007 as part of an ASAT test by a Chinese ballistic interceptor is becoming more apparent as routine and special radar observations of the fragments provide more data. By the end of June 2007 the U.S. Space Surveillance Network (SSN) was tracking more than 2200 objects with a size of at least 5 cm.

I checked as of this morning and debris officially catalogued from the former Chinese Feng Yun 1C weather satellite and interceptor has reached 2015 pieces (1999-025CMD/SSC# 31926). This makes this Chinese ASAT test event by far the worst satellite fragmentation of the space age.

The Fengyun-1C debris cloud extends from 200 km to 4000 km in altitude, with the highest concentration near the breakup altitude of approximately 850 km. The debris orbits are rapidly spreading (see orbital graphics above) and will essentially encircle the globe by the end of the year. Only a few known debris had reentered more than five months after the test, and the majority will remain in orbit for many decades.

The large number of debris from Fengyun-1C are posing greater collision risks for spacecraft operating in low Earth orbit. The number of close approaches has risen significantly. On 22 June, NASA’s Terra spacecraft had to execute a collision avoidance maneuver to evade a fragment from Fengyun-1C that was on a trajectory which would have passed within 19 meters of Terra.

This situation is going to get worse as the debris spreads and encircles the globe in the coming years.

Some background information above courtesy of the NASA Orbital Debris Quarterly News, July 2007 issue and Celestrak/Socrates. 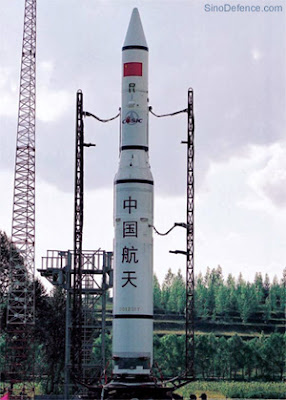 Missile in this picture is the Chinese KT-2, the rocket believed to have been used in the January Feng Yun 1C anti-satellite interceptor test. Picture courtesy of the China Defense Blog (http://china-defense.blogspot.com)
at 7/19/2007 08:48:00 AM