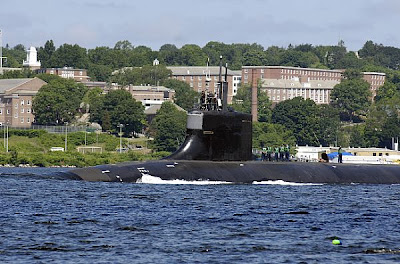 The submarine transferred from its previous homeport of New London, Conn., to permanently reside in Bremerton.

“Today, we celebrate the arrival of the USS Seawolf to the great Pacific Northwest,” said Capt. H.H. “Butch” Howard III, commander of Submarine Development Squadron 5. “The first arrival signifies the vast expansion of the fast attack submarine presence here at NB Kitsap as well as adding about 213 more service members to our outstanding community.”

“The Navy is appropriately shifting its fleet to address the more serious threats in the Pacific,” said Congressman Norm Dicks. “It represents another indication of the growing importance of Puget Sound as a strategically-critical West Coast homeport.”

The submarine was designed to operate autonomously against the world’s most capable submarine and surface threats, having the highest tactical speed of any United States submarine.

Built in Groton, Conn., and commissioned in 1997, the 353-foot submarine was the first in its class, replacing the smaller Los Angeles-class submarine.

The high-speed submarine will bring a 140 man crew as well as keep a continual supply of overhaul work and maintenance at the Puget Sound Naval Shipyard.

“For submariners in the area, the arrival of Seawolf represents much more,” said Howard. “With the fast attack presence, there comes an expansion of opportunity and a unique opportunity for our submarine Sailors. They will be able to expand their experience base, far beyond the traditional ballistic submarine structure that has been in place here for almost three decades.”
at 7/26/2007 07:12:00 AM