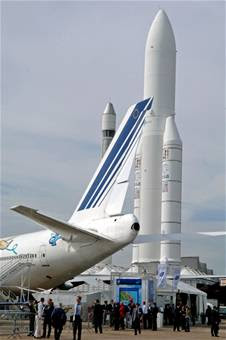 This year's air show, boasting more than 2,000 exhibits from 42 countries, opened to trade visitors June 18 and the general public can visit from June 22-24.

With planes all around and in the sky, every direction holds something appealing.

A range of U.S. aircraft and approximately 70 aircrews from bases in Europe and stateside have flown to Paris to participate in this event. Air Force and Navy members created a display of the finest and most functional aircraft they have to offer to showcase the equipment necessary for present and upcoming military operation successes.

The Air Force also has an exhibit honoring its 60th anniversary. The aim of the exhibit is to highlight several of the significant achievements made by the Air Force over the past sixty years.

"First, to commemorate 60 years of heritage, second, educate the public and our allies of what we bring to the mission, and third to appreciate our partnerships with our allies," he said.
at 6/21/2007 07:00:00 AM