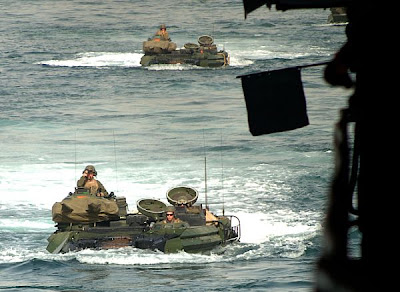 The 26th MEU entered the CENTCOM AOO Jan. 1 to assume the role of theater reserve. With the role came the responsibilities of engaging partner nations in support of regional security efforts and maintaining the capability to quickly respond to any contingency that might arise across the Middle East.

Although the course of the 26th MEU's travels did not include stops in Iraq or Afghanistan, the importance of the work the Marines and Sailors have done throughout the region since February cannot be overstated, said Marine Col. Gregg A. Sturdevant, 26th MEU commander.

"Our continued engagement and regional stability are key to ensuring nations in the Middle East don't fall prey to transnational terrorism," said Sturdevant.

Within days of passing through the Suez Canal and into CENTCOM's AOO, the MEU offloaded several hundred Marines and their equipment in Djibouti to conduct Image Nautilus, an exercise that involved bilateral military training and a community relations project in the African nation.

As elements of BLT 2/2 and CLB 26 wrapped up Image Nautilus, the rest of the MEU continued around the Horn of Africa in preparation for the next regional engagement in Kenya.

Marines from CLB 26 joined with engineers from the Kenyan military to refurbish the Bargoni Primary School in Bargoni, Kenya.

In a separate community outreach effort, several medical specialists from the MEU and Bataan Strike Group held a two-day medical clinic for residents of the Bargoni area.

Marine Medium Helicopter Squadron (HMM) 264 (Reinforced) provided tactical and lift support to both the Marines and Kenyans and between ship and shore.

Following the conclusion of operations in the Horn of Africa, the 26th MEU began moving north into the Persian Gulf and a scheduled exercise with a gulf region nation.

Approximately 900 Marines and Sailors from the 26th MEU participated in the exercise, which included classroom training, practical applications and live-fire ranges.

Shortly after sailing from Qatar, the MEU arrived in the Northern Persian Gulf ready to commence their largest offload and training evolution to date.

The 26th MEU completed the off-load of nearly all personnel and equipment from the ships of the Bataan Strike Group into Kuwait April 23 to begin two weeks of sustainment training at the Udairi Range complex.

The training provided the Marines and Sailors of the MEU an opportunity to exercise and refresh skills that would ensure the unit's continued readiness to conduct contingency operations throughout CENTCOM's area of responsibility (AOR).

The MEU wrapped up training in Kuwait and rejoined the Bataan Strike Group in early May.

USS Bataan (LHD 5) and USS Shreveport (LPD 12) set a course around the Arabian Peninsula and into a Middle East port to stage the MEU for its final engagement exercise in CENTCOM's AOR.

The annual exercise paired Marines and Sailors from the MEU with elements of the host nation military to conduct bilateral training and enhance the two country's interoperability.

The bilateral training culminated with a combined operation that witnessed motorized, mechanized and helicopter-borne forces from BLT 2/2 and the host nation's military conducting a coordinated assault on several objectives with air support from HMM 264 (Rein) and their aircraft.

The presence and work of the greater Bataan Expeditionary Strike Group supporting U.S. Naval Forces Central Command (NAVCENT) throughout the regional maritime environment helped to sustain a secure environment for some of the world's busiest and most vital commercial sea lanes.

As the 26th MEU sets a course for the home waters of the United States, Sturdevant said he is proud of the many accomplishments of the unit's Marines and sailors, and they should be proud of their mission success in support of CENTCOM and NAVCENT.