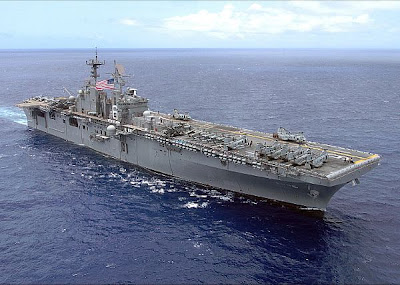 Lt. Javier Garcia, ACU 5’s officer in charge, said the mission of presence ops is to act as an extension of the BHRESG.

“Presence ops is an extension of BHRESG’s maritime operations mission,” said Garcia. “This also gives the warfare commanders a different perspective of the battle space and allows us to see what the other forces operating in the area are doing from ground level.”

“We are required to stay within the recognized route pattern and to maintain a safe distance from other craft,” said Aycock. “During our run we saw a lot of merchant traffic and speed boats. However, we are well-trained and a very experienced crew and safety was our first priority.”

The missions ran two to three times daily over a four-day period, aimed to cover a target area while continually alternating navigational routes.

“The strike group is extremely versatile,” said Martin. “The presence operation was effective on many levels. First off, it shows that we are capable of maintaining a security presence in the region. Second, it also shows that if called upon, we can carry out any mission we are tasked with safely and efficiently. And third, it supports our ESF training which allows us to plan and conduct defensive multitask force operations as part of the U.S.’s long-standing commitment to maintaining maritime security and stability in the region.”

Maritime operations help set the conditions for security and stability in the maritime environment and complement the counter-terrorism and security efforts in regional nations’ littoral waters. Coalition forces also conduct maritime operations under international maritime conventions to ensure security and safety in international waters so that commercial shipping and fishing can occur safely in the region.
at 6/06/2007 08:09:00 AM