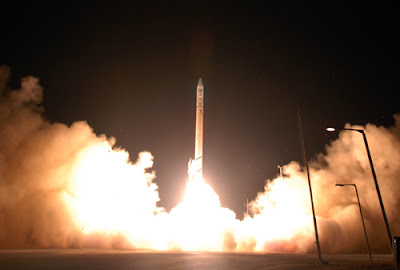 From the Milcom files the Ofek-7 Intl Designator 2007-025A (SSC# 31601). A very interesting milsat launch by Israel given the current situation in Iran and the increased summer tensions with Syria. Have the Israelis ratcheted up the situation another notch? It would sure appear that way.

Press Release from IAI:
Today, June 06, 2007, at 0240 hrs, Israel's 'OFEK 7' satellite was launched and successfully injected into orbit by means of a 'Shavit' satellite launcher. 'OFEK 7' is an advanced technology remote sensing satellite.

In the next phase, the satellite will undergo several tests for validation of its serviceability and satisfactory performance.

Israel Aerospace Industries (IAI Ltd) has developed and produced the satellite and the launcher, in response to an order placed by the IMOD, and in cooperation with various high-tec companies: El- Op, IMI, Rafael, Tadiran-Spectralink, Elisra and some others.

The launch has been conducted from the Israeli Air Force test range at Palmahim Air Force Base.

OFEK 7 - Main Characteristics
The OFEK 7 satellite is an additional Ofeq observation satellite built by Israel Aerospace Industries for Israel MOD. The OFEK 7 is a follow–on satellite to OFEK 5 which was launched in 2002, and contains several enhancements which will provide improved imagery to the customer. The OFEK mini satellite main characteristics:

The satellite was launched by IAI's Shavit launcher to an elliptical orbit of 300 x 600 Km.

Following separation from the launcher, the satellite performed a series of autonomous activities, including deployment of the solar panels. The satellite and its subsystems' performance including the imaging capabilities will be tested over the next few days.

The Shavit Launcher
The global market trend towards the use of smaller satellites for remote sensing, telecommunications, science and other commercial, civilian and military applications is the major driver for IAI's MLM Division to offer orbit insertion services using its SHAVIT family of satellite launchers.

The SHAVIT launcher offers various options for launching small satellites into Low Earth orbit (LEO) – typically 200 to 600 Km above earth surface. The SHAVIT launch system is based on flight-proven hardware and software, and a unique integration and launch concept. These reduce significantly launch preparation time, and, consequently lower the overall launch cost.

SHAVIT is a three-stage satellite launcher, powered by three solid rocket motors. The first two stages lift the launcher to an altitude where the launcher positioned itself to eject the satellite shroud, followed by separation of the Main Instrumentation Compartment. While spinning, the third stage motor is ignited boosting the launcher to orbit velocity and the satellite is inserted accurately into its transfer orbit.

The launcher used to launch OFEK 7 is more capable and reliable than the launcher used for OFEK 5 in 2002. Since the first launch of OFEK in 1988, the SHAVIT launcher was continuously improved in order to enable insertion into orbit of ever more advanced OFEK satellites.
at 6/11/2007 07:12:00 AM