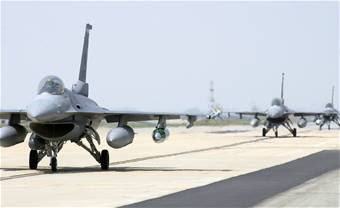 F-16 Fighting Falcons from the 555th Fighter Squadron from Aviano Air Base, Italy, arrive June 19 at Kunsan Air Base, South Korea. Airmen are here for a 120-day deployment. This is the first time a U.S. Air Forces in Europe fighter unit has deployed to a Pacific Air Force base. (U.S. Air Force photo/Senior Airman Barry Loo)

KUNSAN AIR BASE, South Korea (AFPN) -- Airmen of the 555th Fighter Squadron from Aviano Air Base, Italy, reunited with the 8th Fighter Wing June 19 here after being away for years during the squadron's deployment to Kunsan AB.

Approximately 300 Aviano AB Airmen and 18 F-16 Fighting Falcons arrived here marking the first U.S. Air Forces in Europe unit to deploy to a Pacific Air Forces unit as an air expeditionary force rotation for the next four months. The unit will fully integrate and be a part of the 8th FW.

"They will be integrating completely and totally with our base and our (Republic of Korea) allies flying training missions here," said Col. Preston Thompson, the 8th FW vice commander.

"We run regular deployments here because it's important for us to practice our ability to move our aircraft around the world," Colonel Thompson said. "It's also important for us to show our ROK allies that we have the ability to deploy planes here quickly if they ever had a need for us to do so. So it behooves us to train to that and bring planes in here every so often to practice that capability of rapidly deploying forces here if there were ever a need."

The colonel also discussed the benefits of training with the 555th FS Airmen.

"They will be flying normal training missions we fly every day to give our pilots a chance to train with the pilots from our squadrons in Europe and to give our ROK allies a chance to train with other pilots other than what we have here on the peninsula," he said. "It's a continual way for us to improve our relations and to improve our abilities as a joint force team effort."

Members of the 8th FW worked to ensure there were no problems for the arrival of the Aviano AB Airmen.

"It's definitely been a challenge for all of us to prepare for their arrival," said Staff Sgt. Omar Aguilar of the 8th Operations Support Squadron. "It's been a total team effort to get them here and we're glad to have them as part of the 8th Fighter Wing."

"I'm looking forward to a new experience. Usually when you deploy you start from scratch, but here you're actually a part of a wing that's already been established," said Senior Airman Amy Clunk of the 555th FS. "The main challenge I see is that it's a little bit of a cultural difference coming from Europe to Asia."

The deployment of these fighter aircraft into the Pacific Command theater signifies the United States' continued commitment to the regional stability and security in the region.
at 6/21/2007 06:50:00 AM