The New Kidd on the Block 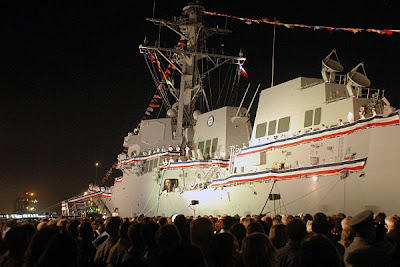 GALVESTON, Texas (NNS) -- The Navy’s newest Aegis-guided missile destroyer, USS Kidd (DDG 100), was brought to life to the cheers and tears of a proud crowd of 2,500 gathered at Galveston’s historic Pier 21 here June 9.

The emotionally-charged nighttime commissioning recalled the Navy’s proud past and heralded its promising future. The new destroyer honors Medal of Honor recipient Rear Adm. Isaac Campbell Kidd Sr. who was killed aboard the USS Arizona during Pearl Harbor — the first U.S. flag officer to die during World War II.

Kidd's granddaughters, Regina Kidd Wolbarsht and Mary Corrinne Kidd Plumer, ship sponsors, ordered the officers and crew to "man our ship and bring her to life," and with a response of "aye, aye ma'am," the DDG 100 crew moved through the cheering crowd to man the rails of their ship.

U.S. Rep. Ron Paul, 14th Congressional District, Texas, served as keynote speaker and saluted the ship, its crew and their role in the defense of our country.

“Whether we are elected leaders or enlisted military, we all take a similar oath to support and defend the Constitution of the United States. In taking this oath, we all pledge to protect the law of our land, and in so doing, we promise to protect our country, our people, and our way of life,” said Paul.

Vice Adm. Terrance T. Etnyre, commander, Naval Surface Forces, also addressed the crew and admonished them to be ever vigilant.

“To those given much, much is expected. You are the recipients of the best technology and machinery in the fleet. Five hundred and ten feet of sovereign U.S. territory that can go anywhere, anytime without permission. This ship's primary mission will be to ensure peace. We don’t know what you’ll encounter, but with you, this ship becomes a warship, and your country expects you to be ready to fight and win when called to defend it,” said Etnyre.

Cmdr. Richard E. Thomas of Westwood, N.J., is the ship's first commanding officer and will lead a crew of 276 officers and Sailors. In his remarks, Thomas proudly recalled the ship’s namesake and encouraged his crew to honor Kidd’s memory with their continued service.

“We carry the name of a great naval leader and war hero. As we set sail under his name, we will strive to live up to his great record and be role models for those sailors who follow after us,” Said Thomas.

Thomas’ recollections of Kidd and the 1941 Japanese attack stirred the emotions of at least one Pearl Harbor survivor in attendance. Enoch “Buttsy” Vaughn, of Dickinson, Texas, was stationed on Ford Island at Pearl Harbor and witnessed the fateful strike during which the USS Arizona was sunk and Kidd killed.

“It was just awful ... I’ll never forget the explosions and the horror of seeing our ships go down,” he said.

Vaughn served throughout the war and remained in the Navy until 1959. Asked what he thought of the Navy’s newest ship, he marveled at its technology.

“We had nothing back then that could compare with this ship ... . it could do the work of 20 of our ships with all its new capabilities,” he said.

With its myriad of offensive and defensive weapons, the 9,200-ton Kidd is capable of fighting air, surface and subsurface battles simultaneously. The ship is also the 50th Arleigh Burke-class destroyer to be built and the third to be named in honor of Kidd. The first Kidd, DD 661, was a Fletcher-class destroyer in service from 1943-1974, and is now a floating museum in Baton Rouge, La. The second Kidd, DDG 993, was in service from 1981-1998, and was subsequently sold to Taiwan.

Shipmates from both DD-661 and DDG-993 were in attendance for the commissioning. Among them was Buddy Wolfford, who served as a boiler tender on the first USS Kidd during the Korean War. Seeing the new Kidd caused him to comment on the great differences and improvements between the generations.

“For one thing, we didn’t have air conditioning. And where we had guns, they’ve got missiles. This is a dream ship,” said Wolfford.

In a continuing salute to the past, plaques from the first Kidd commissioning were put on board along with two smaller boats named after Kidd’s granddaughters, Regina and Mary, who serve as the ship’s sponsors. Both ladies were excited and proud to be a part of the event.

Speaking on behalf of her family, Regina Kidd Wolbarsht said, "To have a ship named for one’s ancestor is truly an honor and we wish her new crew well. We are so proud to be here tonight and deeply appreciate the Navy’s continued recognition of our grandfather and his service. This clearly shows the Admiral’s death and the attack on Pearl Harbor are not forgotten.”

The historic port of Galveston was a fitting site for the ceremony. The port is home to the museum-submarine ship USS Cavalla (SS244), who, on her maiden voyage in 1944, sank the 30,000 ton Japanese aircraft carrier Shokaku, one of the carriers that launched the attack on Pearl Harbor. As USS Kidd departs for her new homeport in San Diego, her crew will render honors to Cavalla, an acknowledgement of the moment in World War II when the submarine struck an avenging blow to the enemy who had killed over 2,400 Sailors at Pearl Harbor, including the ship's namesake.
at 6/12/2007 06:06:00 AM