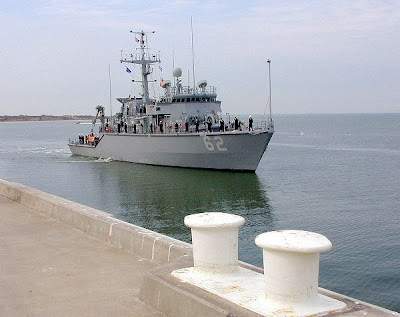 INGLESIDE, Texas (NNS) -- A lone bugler played as Union Jacks and national ensigns were lowered marking the end of service for the final four Osprey-class coastal mine hunters.

"Just as a commissioning signals a bright future," said Lt. Cmdr. Andrew Carlson, commanding officer of MHC Crew Endurance embarked in Cormorant, "a decommissioning marks the end of an era."

The ceremony also marked the date the ships' names would be struck from the registry of active Navy ships. And, their ensigns would fly no more, stated Rear Adm. John Christenson, commander, Naval Mine and Anti-Submarine Warfare Command, Corpus Christi.

"This is why we gather together today," Christenson added, "to honor the coastal mine hunter and her crews, who have paved the way for the next generation of war fighters."

The Osprey-class ships are the world's largest glass reinforced plastic ships and the first U.S. Navy ships designed solely for minehunting, the technique of locating mines with sonar and neutralizing them with a remotely controlled underwater vehicle.

These ships' mission is to clear harbors, coastal and ocean waters of acoustic, magnetic, pressure, and contact type mines, using reconnaissance, classification and neutralization tactics. The ships' design integrates mine countermeasures technology into a uniquely designed platform with exceptionally low magnetic and acoustic signatures to protect again mine detonations during minehunting operations.

These are the final four of the 12 Osprey-class ships to be decommissioned.

Following the ceremonies, these vessels will complete decommissioning maintenance availabilities, and then be towed to Beaumont, Texas.
at 12/07/2007 06:47:00 AM