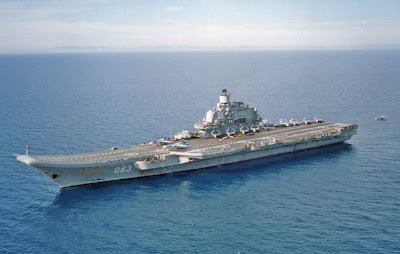 Launched in 1985,but not fully operational until 10 years later, the Admiral Kuznetsov is the only aircraft carrier in the Russian Navy. Under the name Project 1143.5 or Orel Class, the Kuznetsov was constructed at Nikolayev South Shipyard on the Black Sea in the Ukraine. Construction began September 1st 1982 and the ship was laid down in 1983.Only 71% complete by summer 1989 the ship has undergone major maintenance and refits to return to the Northern Fleet.

The UK Telegraph online is reporting that the Russian Navy is resuming Cold War patrols. The article was written by Adrian Blomfield in Moscow and posted to their website (http://www.telegraph.co.uk/) at 0300 UTC.

According to Blomfield, "Russian warships are steaming towards the Atlantic Ocean last night at the beginning of a series of joint naval and aerial exercises designed to showcase Russia’s resurgent military prowess before the world.

"Against a backdrop of growing international concern over Russia’s rapid re-armament and its government’s increasingly belligerent rhetoric, naval cruisers and air-force jets will test-fire missiles in both the Atlantic and the Mediterranean Sea over the next three months.

"In themselves, the exercises — which will involve an aircraft carrier, anti-submarine ships and missile cruisers -- will not cause international concern.

"Unlike Mr Putin’s August announcement that long-range nuclear bombers would resume sorties in international airspace for the first time since the Cold War, these manoeuvres have been extensively discussed with western nations. The Russian ships are expected to visit 11 ports in 16 countries. "

To my fellow HF Ute monitors, this is a golden opportunity for the community to monitor a much more active Russian Navy than we have seen in the past few years. I will be working on a frequency profile for this blog that could help locate some activity by the Russian Navy.
at 12/06/2007 10:12:00 AM