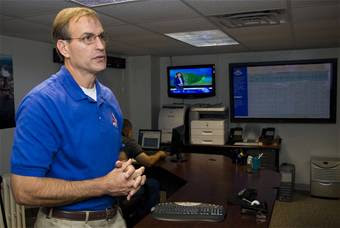 MAXWELL AIR FORCE BASE, Ala. (AFPN) -- When disasters strike, there is a select group of volunteer pilots, search and rescue teams, and trained observers who help those in need. Missing persons, flooding, tornadoes, hurricanes and downed aircraft are some of the situations to which the Civil Air Patrol responds at a moment's notice.

Established in 1941, CAP is the official auxiliary of the Air Force, and its first national board chairman was Gen. Carl Spaatz. Its initial missions were sighting and bombing U-boats off American shores during World War II. Today, search and rescue and aerial reconnaissance make up the bulk of its missions.

CAP, which receives most of its taskings from the 1st Air Force at Tyndall Air Force Base, Fla., is headquartered at Maxwell AFB. Co-located with the headquarters, the CAP National Operations Center is the organization's communication hub during disaster relief operations. There, the headquarters' director of operations has at his fingertips real-time, full-motion video from CAP aircraft or ground vehicles, instantly uploaded still images of federally designated targets such as dams and bridges, and state-of-the-art communication tools.

"We are currently working four missions in Texas," said John Salvador,director of operations for the CAP. The missions were in response to the destruction of Hurricane Ike. "[The Federal Emergency Management Agency], 1st Air Force and the state of Texas gave us several targets for aerial damage assessment. We are also working several targets in Louisiana."

The key to CAP's success with all of its missions is its ability to call upon volunteers and its fleet of high-wing, single-engine aircraft.

"It costs CAP about $120 per hour to operate [an aircraft] during a mission," Mr. Salvador said. "There is no way any other organization could maintain that operating cost, and it is something we could not do without our volunteers."

On average, it costs $1,600 per hour to operate an unmanned aircraft and $2,600 for a HH-60G Blackhawk helicopter, according to CAP statistics.

CAP members throughout Texas gathered recently to help fellow citizens recover from Hurricane Ike. Pilots, observers and ground crews from the Texas wing received taskings filtered through the headquarters here, then went out the photograph coastlines, especially in Galveston, while crews in the Northwest were searching for a missing person and pilots in Virginia were preparing a public relations flight.

The most visible and recent CAP search mission was when aviator Steve Fossett went missing in Nevada in 2007. Mr. Salvador said that the Civil Air Patrol spent almost $230,000 in five weeks looking for the renowned American adventurer, whose light aircraft never arrived at its destination.