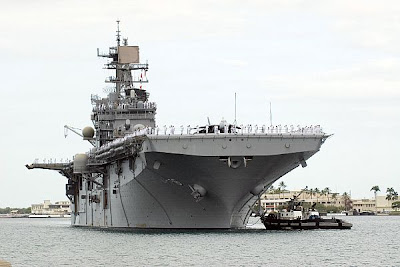 Known as the "Wake Island Avengers", VMA-211 is aboard BHR to allow pilots to earn and maintain necessary qualifications, before deploying to the USS Essex (LHD 2) in support of the 31st Marine Expeditionary Unit.

According to Lt. Cmdr. Matthew Szoka, ship's handler, DLQs ensure pilots are proficient in landing aircraft aboard a naval ship, in the event of an emergency, maintenance issues or to refuel.

"Landing on board a ship, for most pilots, is one of the hardest things they have to overcome," said Szoka. "There are times when your efficiency can slip, especially during night operations, so practice is needed."

During DLQs, pilots practice 'touch and go's, in which an aircraft takes off and touches down for a period of time from different or the same locations, to ensure they maintain mission ready capabilities.

According to Capt. Kristofer Harris, VMA-211 pilot, there are a few challenges to overcome while conducting DLQs.

"Flying a precision pattern and learning the correct site picture to determine the accurate adjustments to flight paths and nozzle levels have proven to be a challenge for myself," said Harris. "I hope to gain the experience to improve my accuracy and precision when landing on board, so I can work safely with the Navy and Marine Corps team."

DLQs also offer shipboard personnel an opportunity to familiarize themselves with flight operation procedures and protocols.

"This is an opportunity for aviation boatswain's mates to train and qualify new personnel," said Aviation Boatswain's Mate (Handling) 1st Class (AW) Wilfred Rabina. "Everyone, regardless of rank, needs training and practice and that's what we expect to gain during DLQs.
at 9/15/2008 05:56:00 AM