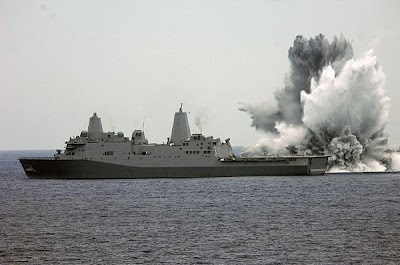 A 10,000-pound underwater explosion rocks the amphibious transport dock USS Mesa Verde (LPD 19) during a shock test off the Florida coast. The test is part of Navy trials for the San Antonio-class ship, which was commissioned last December. U.S. Navy photo (Released)

USS Mesa Verde (LPD 19) completed its third and final shock trial event off the coast of Mayport, Fla., Sept. 13. The ship performed well and is currently returning to Norfolk for post-trial inspection.

Mesa Verde's shock trials are part of the congressionally mandated Live Fire Test and Evaluation Program that requires realistic survivability testing on each new class of Navy ships. Mesa Verde is the third of the new San Antonio-class of amphibious transport dock ships.

The test results from a shock trial provide important information that is applied to follow-on ships and is used to improve the initial ship design and enhance the effectiveness and overall survivability of the ship and crew.

"I am truly excited about the performance of this crew and this ship to bring these shock trials to successful completion," said Capt. Shawn Lobree, Mesa Verde's commanding officer. "We were faced with some challenges, but the diligent efforts of Mesa Verde's crew and the test community, along with a little break in this season's very active hurricane season, allowed us to complete this important testing for this new class."

The first shot of Mesa Verde's shock trial was successfully conducted Aug.16. The second shot was delayed due to Tropical Storm Fay but was successfully executed Aug. 26. Concerns with other hurricane threats and sea conditions delayed the third shot until Sept. 13.

During shock trials, ships experience the effects of 10,000-pound explosive charge detonations which occur successively closer to the ship. These trials are critical to the ship and crew's survivability and provide the best means to assess the shock response of a manned ship and the interaction of the ship's systems and components.

Prior to conducting the shock trials, an environmental impact statement was issued to address the proposed event, the impact on air and water quality, marine life (including marine mammals and endangered and threatened species), commercial fishing and shipping, recreation, and economic and commercial resources. The Navy identified a preferred location offshore Mayport for the shock trials that met the project's purpose and need, satisfied operational requirements and minimized environmental impacts. The Navy incorporated protective measures to minimize potential adverse effects to the environment during and after the shock trials.