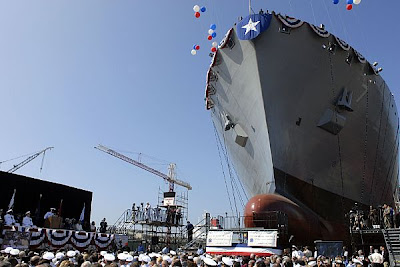 USNS Carl Brashear (T-AKE 7), which will be the newest ship in the U.S. Navy's Lewis and Clark-class of dry cargo/ammunition ships owned and operated by Military Sealift Command when delivered, was christened and launched Sept. 18 at the General Dynamics NASSCO shipyard in San Diego.

The ship is named in honor of Master Chief Petty Officer Carl Brashear, the first African-American to qualify and serve as a master diver in the Navy.

Chief of Naval Operations (CNO) Adm. Gary Roughead attended the ceremony and addressed the importance of the ship's name.

"The naming of a ship is a very significant event. The Navy has practiced naming and christening for 211 years," said Roughead. "The USNS Carl Brashear embodies the spirit and character of this remarkable individual. This is a statement of our beliefs and an affirmation of our values and those of Carl Brashear. I could not be more pleased to have his spirit in this ship."

The keynote speaker of the christening ceremony was Master Chief Petty Officer of the Navy (MCPON) Joe Campa Jr. MCPON spoke about the American spirit epitomized by Carl Brashear and how his perseverance, devotion to the Navy and passion for diving serve as examples for every American.

"Carl Brashear's legacy may have been developed through his time in the Navy," said Campa. "But his story belongs to many more than just those of us who wear the uniform.

"His story is one of the American spirit, nurtured on a farm in Kentucky – and one that will live forever on the deckplates of this ship and in the heart of every Sailor. The character of our Navy changed the day Carl Brashear decided nothing was going to stop him from pursuing his dreams."

Campa, the Navy's 11th MCPON, told an audience that included several active and retired Navy divers, actor Robert De Niro and Sailors from all over the San Diego area, that when he meets Navy personnel around the world, he is constantly reminded that Brashear's spirit lives in each of them.

"I believe their spirit is a reflection of our Navy as a whole, and when I look into the eyes of those young Sailors, I see Carl's legacy staring back."

Lauren Brashear, the master chief's eldest granddaughter, serves as the ship's sponsor. Campa told her and the rest of the Brashear family that, "Carl's honor is also yours. Just as you share his name, you share the immense respect of the entire United States Navy."

Brashear's story was the subject of the 2000 movie "Men of Honor" starring Cuba Gooding Jr. and Robert De Niro.

"I'm awestruck," said De Niro. "To have witnessed this launching and be even indirectly connected to this story of perseverance and selfless service is an amazing feeling. I am truly honored to be here."

The 689-foot USNS Carl Brashear is the seventh ship of the Lewis and Clark-class of dry cargo/ammunition ships for the Navy's Military Sealift Command. NASSCO began constructing the ship in May 2007 and is scheduled to deliver it to the Navy in the second quarter of 2009. When the Carl Brashear joins the fleet, its primary mission will be to deliver food, ammunition, fuel and other provisions to combat ships at sea.
at 9/20/2008 06:50:00 AM