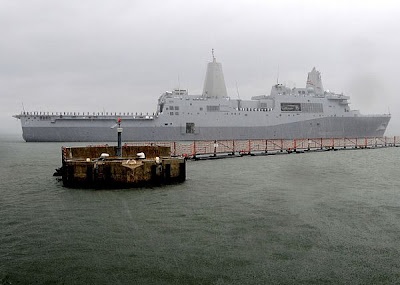 The deployment introduces new technology and capabilities never before seen in any ESG. One example of this technology is the shipwide area network (SWAN).

"SWAN is the first network to be the backbone of vital components of the ship," said Information Systems Technician 3rd Class Wendall Bates.

"Engineering, navigation and steering all run through SWAN, allowing Sailors to monitor all the systems in a much faster and reliable way."

Communications with other ships has always been key to the Navy's success. San Antonio has taken communications to the next level.

"By seeing what other ships see through our radars, we can see targets far ahead and either intercept them ourselves or pass along orders for our allies to intercept."

Targeting surface threats with weapons has also benefited from the new technology.

The engineers aboard keep much cooler thanks to unmanned engine rooms. This is possible due to the engineering control system (ECS).

San Antonio can also serve as a small-scale hospital ship, and boasts a state-of-the-art medical department that is equipped to provide the highest quality of care with the inclusion of systems like Medical Web.

The design of the ship has also made moving supplies throughout the ship less laborious.

"The ship's design places the elevators in front of the store rooms, allowing for easy transfer of stores while other ships often need to snake around the ship to get the stores where they need to go," stated Kastner.

"This Total Ship Training System offers everybody the opportunity to train on any computer aboard on various topics ranging from rate specific training, to basic damage control courses," continued Kastner.

Ultimately, San Antonio was designed with one predominant focus: the Marines and supporting their mission.

"This allows the ship and the Marines to perform independent operations, while the rest of the strike group works other missions. This is the future of amphibious shipping, and the Navy-Marine Corps team will only benefit from its existence."

"These systems, when combined together, will deliver to the Navy the next generation of warships," concluded Kastner.

The strike group is currently en route to the Navy's 5th and 6th Fleet areas of responsibility in support of Maritime Security Operations (MSO). MSO helps set the conditions for security and stability in the maritime environment, as well as complement the counterterrorism and security efforts of regional nations.

The strike group will also support the other tenets of the Navy's Maritime Strategy, which include forward presence, deterrence, sea control, power projection, and humanitarian assistance/disaster response. The Maritime Strategy represents a new vision for the 21st century and establishes new capabilities to codify longstanding challenges, while maintaining the focus on enduring missions.
at 9/04/2008 08:02:00 AM