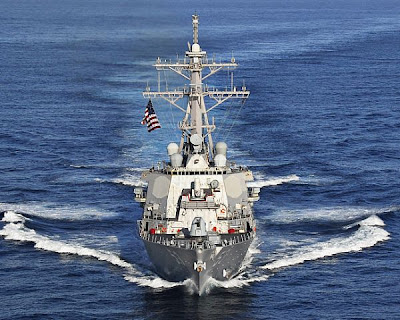 "This has been an incredibly productive and successful deployment for the men and women of John Paul Jones," said John Paul Jones' Commanding Officer Cmdr. Sam Hancock. "JPJ executed operations in every mission area from approach and assist visits to Ballistic Missile Defense (BMD)."

"Throughout the deployment, we provided security and stability while partnering with the Gulf Cooperation Council nations to develop an integrated maritime security environment in the Gulf," said Hancock.

JPJ provided BMD presence and capability in support of national tasking in the 5th Fleet AOR, including the tracking and critical data collection of multiple BMD launches in theater. They also deterred smuggling and other criminal activity, provided aid to local fishermen and disrupted the shipment of more than four tons of illegal narcotics.

In efforts to transition the defense of Iraq and put control back in the hands of the Iraqi people, JPJ also operated almost two months in the Northern Arabian Gulf, assigned to Commander, Task Force Iraqi Maritime. While assigned, JPJ provided defense, training and logistical support for critical Iraqi oil terminal infrastructure in a joint effort with the U. S. Coast Guard, Iraqi Navy, British Navy and other coalition forces.

During port visits to Bahrain and Phuket, Thailand, the crew cleaned, painted and rebuilt a local school and a children's home, respectively.

"This crew is incredibly talented and nothing but pure professionals who never stopped," said Hancock. "They have made me and our country very proud."

JPJ helps provide deterrence, promote peace and security, preserve freedom of the sea and humanitarian/disaster response within 3rd Fleet's 50-million square mile AOR in the Eastern Pacific, as well as supporting the nation's maritime strategy when forward deployed.
at 11/19/2009 08:58:00 AM