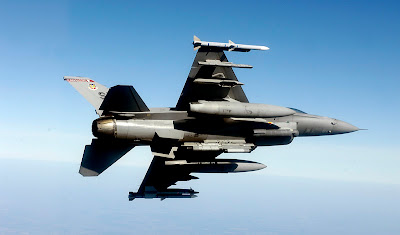 The civilian aircraft entered the TFR from the north. After being alerted by the Visual Warning System there, the pilot turned the aircraft west to leave the restricted area.

The fighters intercepted the aircraft and escorted it to a landing at a facility in Leesburg, Va.

The Visual Warning System is designed to warn pilots who are violating the Air Defense Identification Zone established by the Federal Aviation Administration over Washington, D.C.

VWS is a ground-based system that uses safety-tested low-level beams of alternating green and red lights to alert pilots that they are flying without approval in designated airspace. These visually conspicuous lights, distinct from other light signals currently used by FAA air traffic control, provide a clear warning to pilots who enter the ADIZ without authorization and cannot be contacted on radio by air traffic control.

Only aircraft that are unauthorized or unidentified and unresponsive are visually warned. This visual warning is designed to prompt immediate action by the pilot to contact air traffic control and exit the ADIZ.

NORAD's mission -- in close collaboration with homeland defense, security,and law enforcement partners -- is to prevent air attacks against North America, safeguard the sovereign airspaces of the United States and Canada by responding to unknown, unwanted and unauthorized air activity approaching and operating within these airspaces and provide aerospace and maritime warning for North America.

NORAD may be required to monitor, shadow, divert from flight path, direct to land
and/or destroy platforms deemed a potential threat to North America. NORAD is the bi-national Canadian and American command that is responsible for the air defense of North America and maritime warning.

The command is poised both tactically and strategically in our nation's capital to provide a multilayered defense to detect, deter and prevent potential threats flying over the airspace of the United States and Canada.

More information on the Visual Warning System can be found at on the FAA's Web site at http://www.faasafety.gov/visualWarningSystem/Visualwarning.htm.
at 3/13/2008 09:39:00 AM