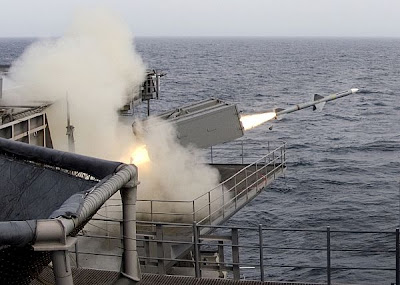 As an unmanned drone flew toward TR a RIM-7 (ship-launched, intercept-aerial, guided-missile) Sea Sparrow was launched and exploded above it, shredding the drone and sending its remains into the ocean.

The RIM-7 is capable of delivering a 90 pound warhead and is one of the primary shipboard defensive weapon systems currently in-use by not only the U.S. Navy, but several other NATO countries.

This exercise was a significant milestone in TR's pre-deployment preparations, and provided key training and certifications.

"If we had to go out next month into the Gulf and do it all over again we definitely could," said Fire Controlman 3rd Class James C. Gass. "We'll be able to do great. We hit the drone with our first missile, and that's really good."

The Combat Direction Center (CDC) prepared for the test using live aircraft to simulate incoming missiles, according to Lt. Cmdr. Dan Nichols, TR's Senior Tactical Action Officer (TAO). The team practiced exactly how they were going to engage the incoming drone during the missile exercise.

In addition to aircraft, the CDC used an onboard simulator to give watchstanders a realistic training environment in preparation for the exercise so they had their procedures down perfectly. When the drone started its inbound run from 20 nautical miles away, there was not a lot of time to figure everything out, and CDC wanted to handle the situation correctly and accurately on the first try.

"Three weeks ago when we started putting this together, there was a lot of disconnection," said Lt. Craig A. Rosen, of TR's Operations Department. "We had to bring in a lot of information from all over the place. We really came together as a team. We created all of the briefs, we created a product that we thought the captain would be happy with and we felt like we could conduct a safe exercise. In the end, it all worked out."