JFK Towed to Philadelphia for Storage 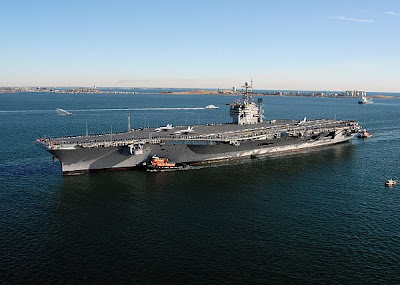 Due to safety and security concerns, the ship will not be open for tours while in storage in Philadelphia.

A contracted tug boat began towing the inactive carrier John F. Kennedy from Norfolk Naval Station on March 17. The ship was originally scheduled to be towed to Philadelphia in August 2007, but was instead towed to Norfolk while the Navy dredged in the vicinity of Pier 4 to further increase the safety of the ship mooring process and the surrounding waterway.

John F. Kennedy is currently on the Navy's inactive inventory, meaning the ship has been taken out of commission and laid up for safe storage pending a future SECNAV decision regarding the ultimate disposition of the ship. As required by the fiscal year 2007 National Defense Authorization Act, the Navy will maintain the ship in a state of preservation that would allow for reactivation in the event the carrier is needed in response to a national emergency.

The ship's historical items have been removed and transferred to the curator of the Navy for preservation and storage.

Named in honor of the 35th president of the United States, John F. Kennedy's keel was laid in 1964 at Newport News Shipbuilding and Drydock Company in Newport News, Va. In 1967, nine-year-old Caroline Kennedy, daughter of the late president, christened the ship. "Big John", as the carrier would become known, was commissioned in September 1968.

A veteran of 18 deployments to the Mediterranean Sea and Middle East, John F. Kennedy amassed more than 260,000 arrested landings on her flight deck while operating virtually every tactical aircraft in the Navy's arsenal. In 1989, two of the embarked air wing's F-14 Tomcats shot down two Libyan MIG-23s that were approaching the battle group in a hostile manner. The carrier also participated in numerous other campaigns including Operations Desert Storm, Enduring Freedom and Iraqi Freedom, and was sortied following the 2001 terrorist attack on the World Trade Center.

Homeported at Naval Station Mayport since 1995, John F. Kennedy most recently served as a training platform for naval aviators to obtain their carrier landing qualifications. Her final port call was to Boston in March 2007.

The ship measures over 1,050 feet long, displaces 82,000 tons and could carry 70 combat aircraft – the full complement of today's carrier air wing. The crew consisted of more than 4,600 personnel when including the air wing. John F. Kennedy was one of the two remaining fossil-fueled aircraft carriers in the U.S. Navy.
at 3/25/2008 07:34:00 AM