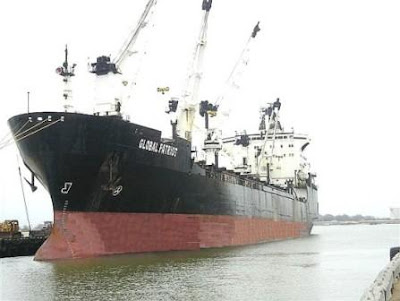 WASHINGTON, March 25, 2008 - A ship on short-term charter to the U.S. Navy's Military Sealift Command fired warning shots at a small boat approaching the ship as it was preparing to transit the Suez Canal last night, military officials reported.
There were no reports of casualties from the ship, the Global Patriot.

Officials said several boats approached the Global Patriot while it was preparing to transit the Suez Canal. The boats were hailed and warned by a native Arabic speaker on the Global Patriot to advise them to turn away. Other warning steps, including a signal flare, were used to caution the boats.

One small boat continued to approach the ship and received two sets of warning shots 20 to 30 meters in front of the boat's bow. All shots were accounted for as they entered the water, officials said.

The incident is under investigation. The U.S. Navy's 5th Fleet command is cooperating with Egyptian authorities, including the Suez Canal Authorities, through the U.S. Embassy in Cairo.

And from my Milcom files:

The Global Patriot is a multipurpose Ro-Lo vessel Global Patriot. The vessel is ideally suited for carriage of rolling stock, containers, project cargo, heavy lifts, break bulk, and bulk cargo. The vessel primarily sailes between the US Gulf, Red Sea, Persian Gulf, East Africa.
at 3/25/2008 09:59:00 AM