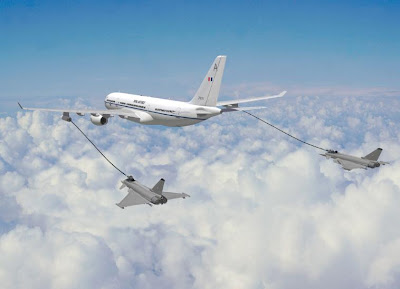 WASHINGTON (AFPN) -- Secretary of the Air Force Michael W. Wynne and Vice Chief of Staff of the Air Force Gen. Duncan J. McNabb announced the selection of Northrop Grumman as the winner of the KC-X competition for development and procurement of up to 179 tanker aircraft for approximately $35 billion.

The initial contract for the newly named KC-45 is for the system design and development of four test aircraft for $1.5 billion. This contract also includes five production options targeted for 64 aircraft at $10.6 billion.

"The tanker is the number one procurement priority for us right now," General McNabb said. "Buying the new KC-45A is a major step forward and another demonstration of our commitment to recapitalizing our Eisenhower-era inventory of these critical national assets. Today is not just important for the Air Force, however. It's important for the entire joint military team, and important for our coalition partners as well. The KC-45A will revolutionize our ability to employ tankers and will ensure the Air Force's future ability to provide our nation with truly Global Vigilance, Reach, and Power.

"It is the first step in our critical commitment to recapitalize our aging fleet to move, supply and position assets anywhere. In this global Air Force business, the critical element for air bridge, global Intelligence, surveillance and reconnaissance and global strike is the tanker," he said.

The KC-45A will provide significantly greater air refueling capabilities than the current fleet of Eisenhower-era KC-135 Stratotankers it will begin replacing. For example, it will be able to refuel Air Force and Navy aircraft on every flight. These aircraft have different systems for receiving fuel and today, KC-135s must be set up for one or the other before takeoff.

The KC-45A will be equipped for both systems on every flight and also will have connections for wing pods. When wing pods are installed, it can refuel two probe-equipped aircraft, such as those flown by Navy and many allied aircrews, at the same time. The KC-45A can even be refueled in flight by other tankers.

The KC-45A also will have defensive systems that allow it to go into dangerous environments that tanker aircrews currently have to avoid. It will also supplement the airlift fleet by carrying cargo, passengers and medical patients in a secondary role.

The KC-X source selection used a "best value" determination to select a winner based on five factors: mission capability, proposal risk, past performance, cost/price and an integrated fleet air refueling assessment -- performance in a simulated war scenario. These five factors were developed after consulting with industry and were finalized prior to starting the competition. Considered together, these grading criteria ensured the Air Force maximized the capability delivered to the warfighter while optimizing the taxpayers' investment.

Air Force officials followed a carefully structured process, designed to provide transparency, maintain integrity and promote fair competition. Air Force officials met with offerors on numerous occasions to gain a thorough understanding of their proposals and provide feedback on their strengths and weaknesses. Officials also provided insight into government cost estimates throughout the process instead of waiting until the post-decision debrief. The competitors indicated they've been very pleased with the degree of communication.

The evaluation team comprised experts covering a broad spectrum of specialties from acquisition to operations and was hand-picked from across the Air Force and other government agencies.

"Today's announcement is the culmination of years of tireless work and attention to detail by our acquisition professionals and source selection team, who have been committed to maintaining integrity, providing transparency and promoting a fair competition for this critical aircraft program," Secretary Wynne said. "Through these efforts, we believe we will provide a higher-value resource to the warfighter and the taxpayer."
at 3/04/2008 07:43:00 AM