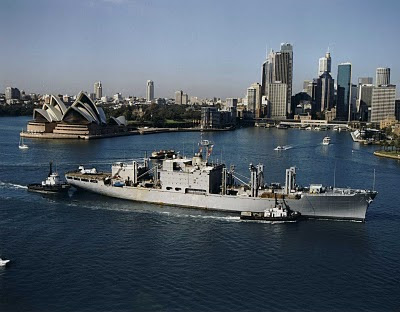 The event paid tribute to the ship and the hundreds of sailors and civil service mariners who have served as its crew over the past three decades, ensuring that San Jose played its part in keeping the U.S. Navy fleet at sea, on station and combat ready by delivering vital supplies to deployed warships worldwide.

San Jose will be deactivated from the Navy in January 2010 and is the last of eight combat stores ships to deactivate from MSC's Naval Fleet Auxiliary Force. These ships delivered food, spare parts, mail, fuel and other supplies to U.S. Navy ships at sea. San Jose and five other combat stores ships were originally crewed by sailors until they were transferred to MSC in the 1990s and shifted to civil service mariner crewing. The others came directly to MSC from the British Royal Fleet Auxiliary in the early 1980s.

San Jose transferred to MSC in October 1993. During its service with MSC, San Jose conducted countless underway replenishments with Navy combatant ships operating in support of missions, most recently in providing logistics support to Navy ships in the Arabian Gulf supporting both Operation Enduring Freedom in Afghanistan and Operation Iraqi Freedom.

"All of the crews who have served on board USNS San Jose have set and maintained the highest standard of excellence in underway logistics to our Navy," said Capt. Jerome Hamel, the commodore in charge of MSC's combat logistics force ships operating in the Eastern Pacific.

"Being here to recognize these ships and the professional merchant mariners who sail them is appropriate," said Hamel. "These mariners will now move into the future with the Lewis and Clark-class ships that will continue to support the fleet and take on new missions and roles as fresh challenges arrive."

The nearly 600 foot-long San Jose completed its final mission Dec. 3, when it returned to port in Pearl Harbor with a crew of 120 civil service mariners and a 40-member military detachment. Today's ceremony marks the end of the ship's operations. The bulk of the crew will disembark the ship following the ceremony and the official deactivation will take place in mid- to late January 2010.