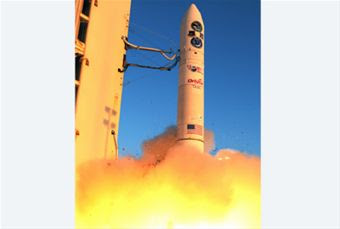 Blog Ed Note: I have complete details on this launch and payloads on our sister blog the BTown Monitoring Post at http://monitor-post.blogspot.com/2010/11/launch-notification-stpsat-2-usa-217.html

FalconSAT-5 was designed, built and tested by Air Force Academy Class of 2010 cadets as part of the FalconSAT capstone astronautics program.

Col. Marty France, the permanent professor and head of the Academy Department of Astronautics, accepted satellite control authority from the Space Test Program's Col. Carol Welsch after FalconSAT-5 separated from the Minotaur IV booster. Cadets performed the first contact missions with the satellite after troubleshooting a problem with a ground-based antenna here.

"We really appreciate the worldwide support over the last couple of days, from the launch site, a great turnout at the launch party, early contact runs and the many well-wishers," an Astronautics Department official said on the USAFA Astronautics Facebook profile.

FalconSAT-5 carries Department of Defense Space Test Program experiments designed to study Earth's ionosphere and its impact on radio-frequency communications.
at 11/25/2010 08:38:00 AM