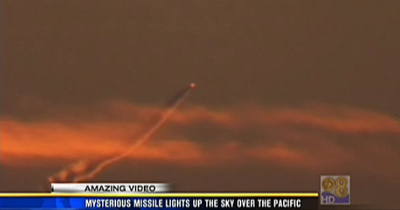 DoD may have put the Mystery Missile Launch on the West Coast story to bed, but the conspiracy theory machine continues to work on it in the overtime mode.

On the Death by 1000 Papercuts (DBKP) website they have a story about F-22s and B-2 aircraft appearing in the area after the fact and tying that into emails they received regarding who may have launched that missile. You can read that story at http://deathby1000papercuts.com/2010/11/mystery-missile-a-jet-eyewitnesses-report-b-2-stealth-bombers-f-22-stealth-fighter-jets/.

CNN iReporter TerrenceAym claims in a Nov 12 online report not vetted by CNN that there is new evidence that the missile belonged to the North Koreans. That report is available at http://ireport.cnn.com/docs/DOC-518213.

"Iden, with your knowledge and access to aerospace & air traffic control sites what is your take or opinion on the missile launch video shot near Santa Catalina a few days ago?

"I became very interested in the whole thing and read all I could including posts to aircraft communications monitoring groups.

"In the photos, it sure looked like a missile launch. I would have bet on it.

"Some figured it might be a U.S. show of power but I discount that because it would have been publicized and not discredited.

"Some wondered if a missile came from a foreign sub to show they could do that in our back yard.

"Some wondered if it was an accidental launch form one of our subs.

"Some said it was a matter of visual perspective and that it caused by an airliner contrail.

"Yesterday, I went onto my somewhat westward facing back lawn here in Northern California, I faced west, tugged at my beard, spit a couple times, and kicked at the dirt a bit.

"I tried to get my arms around an airliner contrail possibility -- to give that theory a chance.

"My main argument against this was that if the atmospheric conditions were such that aircraft could produce such contrails at that time, um, why was there only ONE contrail?

"Mentally, I flipped my perspective from viewing it as something going away from me to one where it was sort of coming toward me and if it continued, it would pass by my right shoulder to points behind me.

"A long persistence contrail could produce a fat trail in the distance and get narrower / less full as it progressed more or less toward me.

"As much as I like a good conspiracy theory, I have to admit that, at this point, yes, it really could have been an airliner contrail.

"I have also seen Vandenberg launches from a distance. Iden"

Thanks Iden for sharing that with us here on the Milcom Monitoring Post and I agree with Iden's conclusion.

And from our friend Jonathan McDowell and his Jonathan's Space Report No. 634 draft.

Mystery missile launch? Or aircraft contrail?
------------------------------------------------
"Launches of NASA Black Brant IX rockets from San Nicolas Island in California carrying MARTI targets for the Missile Defense Agency's Airborne Laser testbed have been removed from public NASA schedules. The most recent such launch, which was publicly acknowledged, was on Oct 21. The MDA has also launched Scud missiles as targets from the ocean off Point Mugu. Launches of target missiles for the Aegis ship-based missile defense system begin tested by the US and Japan have also occurred
in the Pt Mugu area.

"Video of a contrail seen by an LA helicopter news crew on Nov 9 (Nov 8 Pacific time) not far from the San Nicolas/Pt Mugu area was at first thought to be related to these programs but it's now clear that it was just an aircraft contrail seen heading directly at the observer and illuminated by the setting sun. A discussion on flightaware.com suggests US Airways AWE 808 from Honolulu to Phoenix was the culprit.

"See http://uncinus.wordpress.com/2010/11/09/4/ for another example. MDA has reportedly said they didn't launch anything; media reports say that "the Navy" also disowns the event; I'm assuming that's Pt Mugu who would be the relevant part of the Navy."

Finally, knowing what I know about US military maritime surveillance/intel assets and systems, a missile carrying sub from either China or North Korea that close off the west coast just doesn't sneak into our coastal waters, fire a missile and get away. Their presence and subsequent missile launch would be like crashing a dump truck into a bank to rob it. DoD acoustic nets and space surveillance assets would have known about these folks long before they got here and we would be shadowing them. Anything that came out of the sub-surface like a missile that close would have already triggered a military response from the US. It just didn't happen. Sorry conspiracy theorists.

As for a US missile launch, more than likely not. If it was planned, there were no notice to airmen or mariners for the area where the launch came from. Up the coast yes, down the coast no.

If it was an accident, Naval OPREP-3 messages would have been in the air and thick as fleas. Those sort of things just won't remain a secret. Someone would have leaked that sort of event to the media and that hasn't happened. Our government is very poor at keeping secrets, even the NSA compartmented surveillance program kind of secrets. Such an event would be to spectacular to not leak of it really happened.

So we are left with the only other possible explanation, it was an aircraft contrail. I'll buy that unless someone can come up with "concrete," and not from some source of a source from a friend of my third cousin six times removed type of theory that it was something else. You conspiracy folks can now pack your stuff up and go back to investigating the government involvement in 9/11, little green men and flying saucers in Area 51, and Big Foot in the Pacific NW.