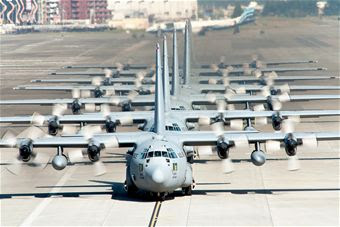 C-130 Hercules aircraft from the 36th Airlift Squadron taxi out for a mission during a seven-ship sortie Nov. 4, 2010, at Yokota Air Base, Japan. The sortie was part of a Samurai Surge exercise. The squadron is the only forward-based tactical airlift squadron in the Pacific region. They provide C-130 aircrews to conduct theater airlift, special operations, aeromedical evacuation, search and rescue, repatriation and humanitarian relief missions. (U.S. Air Force photo/Osakabe Yasuo)

Launching the fleet is an operation that occurs when Airmen launch as many aircraft available on the ramp simultaneously, known locally as Samurai Surge.

"The C-130s here at Yokota Air Base are the only tactical airlift fleet for the Pacific Air Forces, so we provide the tactical airlift to be able to move humanitarian supplies, medical evacuation missions and any cargo-carrying capability that units need here within the Pacific," said Capt. Michael Makaryk, the 374th Aircraft Maintenance Squadron officer in charge. "We launch here from Japan and we go to places like Thailand, Australia, anywhere in the Pacific Command area of responsibility to deliver whatever needs to be delivered."

The Samurai Surge is a joint effort between the 374th Maintenance Group and the 374th Operations Group.

For the groups, the exercise was a way for aircrew and maintainers to test their ability to generate all available aircraft.

"We need to be able to demonstrate our maximum capability at a moment's notice in order to support any type of higher-headquarters tasking, whether it be humanitarian or combat support at a moment's notice," said Chief Master Sgt. Albert Novelli, the 374th Aircraft Maintenance Squadron superintendent. "We need to be able to launch our aircraft and get out of town in support of that mission,"

"The normal flying and training schedule is normally one, two or three aircraft a day, so in order to put up seven or eight aircraft, it takes a lot of effort from our maintainers and our operators," Captain Makaryak said.
at 11/08/2010 08:35:00 AM