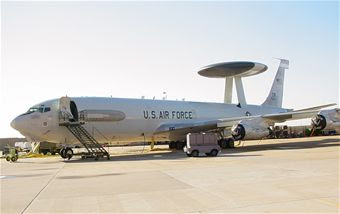 The first E-3 Sentry, or Airborne Warning and Control System aircraft to receive the block 40/45 upgrade sits Nov. 18, 2010, outside the programmed depot maintenance hangar at Tinker Air Force Base, Okla., awaiting pre-checks prior to PDM and the installation of the upgrade. (Courtesy photo)

HANSCOM AIR FORCE BASE, Mass. (AFNS) -- The next step in the largest block upgrade in the history of the E-3 Sentry, or Airborne Warning and Control System aircraft occurred Nov. 18 at Tinker Air Force Base, Okla., when the first aircraft receiving the block 40/45 modification was inducted by the Oklahoma City Air Logistics Center.

New mission software will enhance tracking and combat identification capabilities, in addition to providing operators with a better picture of the battlespace.

The upgrade also allows for more sensor integration both on- and off-board the aircraft, improves the aircraft's data link infrastructure, improves machine-to-machine interaction and compresses the timeline from threat engagement to neutralization.

"Think about technology thirty or forty years ago, or even five years ago, and compare it to the capabilities a smartphone has today," Major Johnson said. "We need to give our warfighters improved technological capabilities so they can do their jobs more efficiently and effectively."

The upgrades are being performed at the same time as programmed depot maintenance to minimize aircraft operational downtime.

"Doing a modification of this size during PDM has never been done before," Major Johnson said. "The scheduling, planning and coordination has been a key piece to get us to this event."

Other program office planners are expressing interest in trying to do something similar for their modification efforts.

In late October, ESC officials awarded a contract to Boeing for $65 million to procure and manage the thousands of parts needed, and also provide on-site production and installation support throughout the upgrade.

"ESC's role as lead integrator is to ensure all the pieces are in place, so before a wrench is turned, everything needed is there," Major Johnson said.

This first aircraft is the centerpiece of low rate initial production, he said.

"This first aircraft is critical," the major said. "It puts us on the path to our full rate production decision, which is planned for 2012."

All the aircraft in the AWACS fleet are scheduled to be at full operational capability by 2020, he said.

As a significant amount of the equipment being installed is commercial-off-the-shelf, ESC members are also thinking ahead with regard to technology obsolescence.

"Anyone who has bought a laptop computer over the last few years knows how quickly technology can change," Major Johnson said. "We're replacing all of the onboard computer work stations with laptops over the next several years, one aircraft at a time. In a modification of this complexity, laptops are only one of many components we are carefully watching."

To accomplish that, ESC officials awarded a contract to Boeing for $15 million in September to support active management of diminishing manufacturing sources and materiel shortages.