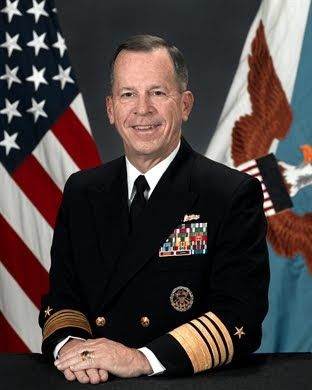 WASHINGTON - The only thing predictable about the North Korean regime is its unpredictability, the chairman of the Joint Chiefs of Staff said in a television broadcast today.

Navy Adm. Mike Mullen told CNN today that North Korean dictator Kim Jong-il is trying to assure the transition of leadership to his son, Kim Jong-un. He implied that the sinking of the South Korean navy ship Cheonan in March and the artillery strikes on Yeongpyeong Island on Nov. 23 are part of that process.

"He is consistently destabilizing and is only predictable in his unpredictability," the admiral said. "He galvanizes everyone around with the potential that they could go to war with South Korea."

North Korea is on a path to develop nuclear weapons, and the artillery strikes on Yeongpyeong Island are latest sign of his continued belligerence, he said.

Kim Jong-il reportedly cited South Korea's recent military exercises with the United States as a reason for the artillery strike.

However, the Hoguk series of exercises that began earlier this month in South Korea and include 70,000 South Korean troops, have been long planned, Mullen said. Exercises built around the USS George Washington carrier battle group in the Yellow Sea began today. Both sets of exercises are built around deterrence, in response to the sinking of the Cheonan, which killed 46 South Korean sailors.

"It focuses on security in the Yellow Sea particularly in respect to submarine warfare," he said. "It is meant to send a very strong signal of deterrence and also to work with close allies in South Korea.

"I don't think this will be the last exercise," he added. "This is a part of the world that we've exercised in for decades and we will continue."

South Korea and the United States are focused on restraint and not letting the situation get out of control, the admiral said. "The South Koreans, so far, have responded that way," he said. "Nobody wants this thing to turn into a conflict."

China is also urging restraint and Chinese leaders probably are the only people who can exert influence on North Korea, Mullen said.

"The Chinese certainly were involved with the response at the United Nations after the sinking of the Cheonan," he said. "The North Koreans were taken aback by the strength of that response from China. We think it is important for the international community to lead, but in particular, China.