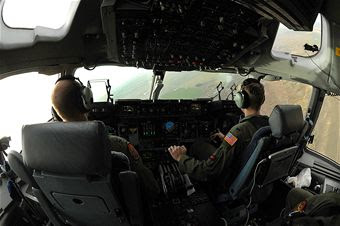 There are many flight training limitations in Hawaii, including getting realistic flight instrumentation, assault landing, and drop-zone experience.

"The Pacific Northwest offers a plethora of training opportunities that we don't get on the Islands of Hawaii," said Capt. Dave Morales, a 535th AS pilot. "Specifically, the mountainous terrain allows us to get low toward the ground when we fly our terrain following low levels."

The weather patterns in Hawaii, where temperatures hover around 80 degrees with a partly cloudy sky, result in an environment where strictly instrumentation flying is not necessary.

"They (Washington) have a couple of (instrument flight rules) drop corridors that allow us to actually fly in the weather to a drop zone and conduct airdrop," the captain said. "Weather is always an issue here."

Grant County, Wash., near Moses Lake, has a 3,500-foot assault-landing zone where pilots get the opportunity to practice assault landings without any simulation.

Marine Corps Base Hawaii has a simulated assault-landing field, but according to the pilot, nothing is better than landing on the real thing.

"It's a realistic approach to an assault landing, where you have to put that aircraft down on a very small runway," the captain said. "That's something once again we don't get to do over at (Marine Corps Base Hawaii), which is our primary training base."

The crew took a look at the area during the day flying low-level and airdrop patterns.

They also took a look at the military training route under the cover of darkness, using night-vision goggles.

"The pilots are getting a ton of training out of it," Captain Morales said. "Just being in the cockpit, absorbing all that, is great training in and of itself."

According to Capt. Rob Greeson, a 535th AS pilot, taking a look at the training area, drop zone and assault-landing airstrip during the day and at night are two totally different experiences.

Performing an unrestricted descent for a tactical arrival on an actual assault-landing zone at night while wearing night-vision goggles does not have the peripheral rush of the ground as the airplane gets closer to touchdown, he said.

"It's like a video game, in that you only concentrate on what is in your line of sight," Captain Greeson said. "During the day, you can see how short the runway really is. At night, all you see is five lights and the data the airplane gives you. There is no ground rush. You have to trust the instrumentation."

Training like this is a stepping stone in proficiency and leads to larger formations, like those conducted at the Mobility Air Forces Exercise in Las Vegas.

Throughout the training in Washington, Captain Morales, a U.S. Air Force Weapons School graduate, is making sure the four pilots on the training mission are cycled through the cockpit for the training they need.

Staff Sgt. Jason Jones, a 535th AS loadmaster, has been with the crew every step of the way, training in the back of the airplane while the pilots hone their tactical skills.

"I'm getting a lot of crucial real-world training that is not available at Hickam (AFB)," Sergeant Jones said. "There are some inherent limitations to Hickam Field and even (the Marine Corps Base Hawaii) airstrip that keep loadmasters from performing currency items such as combat offloads. We have to stay current and proficient on many aspects of flying and get it on missions like this."
at 11/18/2010 06:19:00 AM