Where are the Carriers? 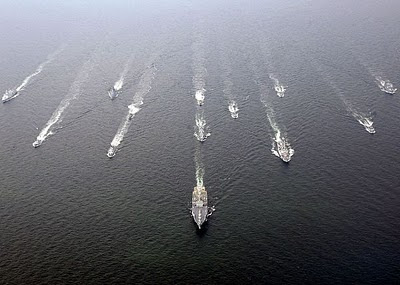 “When word of a crisis breaks out in Washington, it’s no accident that the first question that comes to everyone’s lips is: ‘Where’s the nearest carrier?‘”

At a dinner party on Manhattan’s upper east side recently, I asked my table-mates how many aircraft carriers they thought America had in service. It wasn’t an idle question. It was triggered by comments from two of the guests. Both had just returned from Iran, and one was a senior European Union staffer involved with security issues. Their report was seriously distressing, and the conversation turned to the possibility of U.S. (or Israeli) intervention.

The answers to my question – how many carriers — ranged from 22 to 100. The EU expert weighed in with 40. All were shocked to learn that the United States has a total of just 11 aircraft carriers. And even that number is misleading: two are in dry-dock, one for a four-year refueling; six are various stages of refurbishment, training and certification and can, in theory, be ready to “surge” in 30 to 90 days. But only three are actually deployed.

knew the number because I had recently been aboard the USS Harry Truman, a nuclear super-carrier with some 70 jets and a crew of 5500. Following my embark, I was determined to investigate the value of these behemoths as objectively as a concerned citizen (without a security clearance) could. I interviewed dozens of defense experts and reviewed thousands of pages of studies and testimony. I was also sensitive to the fact that I had experienced a tailhook landing and catapult launch, which are often referred to as “the most fun you can have with your clothes on.” I appreciate why, and tried not to let that interfere with my assessment.

My questions started with the basics: Are carriers cold war relics as critics charge? Or are they, as supporters profess, cost-effective platforms essential to achieving critical foreign policy and security objectives? Are they too vulnerable to new Chinese anti-ship missiles as Defense Secretary Gates implies? Or is that vulnerability the latest feint by inter-and-intra-service rivals? And is 11 the “right” number to meet current and potential obligations?

The answers I found were not encouraging. And my dinner partners’ surprise quickly turned to concern.