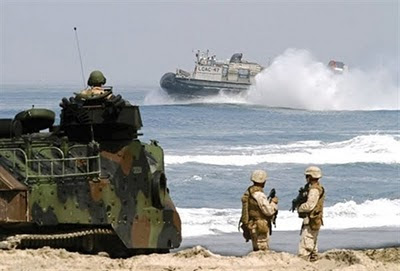 CAMP LEJEUNE, N.C. - After nearly a decade of fighting in Iraq and Afghanistan, the Marine Corps has been inappropriately branded as a second land army.

In response to this misconception, the Corps returned to its amphibious roots Dec. 11 with exercise Bold Alligator 2011, an operation with the Navy's U.S. 2nd Fleet, which re-establishes Marines in their traditional role as "fighters from the sea."

"Though we have focused [at this level] almost exclusively on land warfare in Iraq and Afghanistan for the last decade, amphibious operations continue to be the mainstay of our Corps' mission," explained Marine Corps Col. Scott D. Aiken, operations officer for the 2nd Marine Expeditionary Force. "We have been working toward this for more than two years now, and it's one of the first of many steps in the direction to revitalize our core competency."

During these two years, planners from the Marine Air-Ground Task Force Staff Training Program in Quantico, Va., have been busy engineering scenario-based environments to test the Navy/Marine Corps team on their amphibious competence and the dozens of different missions that fall under amphibious operations.

In fact, since 1990, the Navy/Marine Corps team has conducted more than 110 amphibious operations throughout the world, including noncombatant evacuations, disaster relief or similar crisis-response operations conducted in austere and uncertain environments.

"While assault is one reason for maintaining amphibious capabilities, the utility in conducting raids, demonstrations and amphibious support to noncombatant operations is immense," Richwine explained. "Amphibious forces also have enormous deterrent value against potential adversaries."

Bold Alligator 2011 is the first installment in what will be regularly scheduled large-scale amphibious exercises involving the 2nd Marine Expeditionary Brigade and the Navy's Expeditionary Strike Group 2. Marines and sailors are conducting the exercise from two Navy landing helicopter assault amphibious ships, the USS Iwo Jima and USS Bataan, and multiple simulation centers that will provide in-depth analysis of landing timetables, weather conditions and fires effects. The next scheduled event for the training cycle is a live exercise scheduled for February.

The scenario for the exercise includes the conduct of a forcible entry operation to enable a noncombatant evacuation in the midst of a violent sectarian conflict. This complex, but realistic, mission requires the ability to respond rapidly, project a credible security force ashore, and organize the evacuation of thousands of noncombatants.

In many cases, these capabilities can be provided only by amphibious forces. Bold Alligator 2011 is designed not only to retain proficiency in amphibious operations for the Navy/Marine team, but also to update concepts, procedures and techniques, and to incorporate the new enablers developed since the units last focused on amphibious operations at the this level in 2001, officials said.

"We need to continuously refine our thinking and our training with amphibious capability," Richwine said. "We have the opportunity to develop new skill sets across the entire range of military operations - from humanitarian assistance to contested beach assaults, and everything in between."
at 12/16/2010 06:23:00 AM