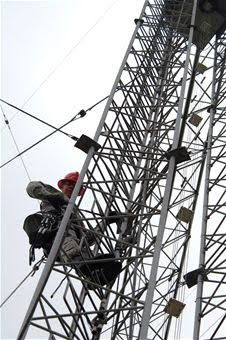 The Airmen are part of the 1st CMXS cable and antenna theater maintenance team are maintaining 30 antenna systems at these locations that provide the capability for ground-to-air communication between base members and aircraft in the air.

RAF Barford, once used by the Royal Air Force in the 1930s to test jet engines and was a bomber-staging base during World War II used for filming the classic movie "Twelve O'Clock High" now makes up the communications link for not only the Air Force but also many NATO partners.

"Basically when a flight crosses the Atlantic Ocean into Europe, they need communication points along the way," said Tech. Sgt. Scott Dunbar, the cable and antenna theater maintenance team chief.

The team, part of a 24-person shop belonging to the 1st CMXS, uses tools and technical orders brought from their home station along with support equipment from other bases such as vehicles like a low profile line-truck to tighten and repair tower guy-wires. They also do corrosion control checks, system testing and function checks during their site visits.

Last year, U.S. Air Forces in Europe officials centralized all Airmen in the 2E6 career field in Germany, making the cable and antenna theater maintenance team more important than ever because they're in high demand. Each member of the team is hand-picked to fill the special-duty assignment. With a 24-hour emergency response time, the Airmen know being on the road a lot to maintain the more than 600 antennas throughout Europe has become the norm.

"Being on the team can be challenging, we deploy a lot maintaining these systems, sometimes more than 180 days a year, but these systems are vital to communications of not only aircraft transiting the Atlantic, but also (officials from) U.S. Strategic Command, AWACs, (E-8C) Joint Stars, the president, and even the search and rescue capabilities of NASA," Sergeant Dunbar said.

The simple location of these systems causes some unique challenges as well.

"The weather here especially causes some of the challenges we face, from causing the systems to lose reception to causing adverse working conditions," said Staff Sgt. Sean Lavely, a cable and antenna theater maintenance team member. "Sometimes the wind makes it a little dicey being up there on the tower."

But as Sergeant Dunbar explained, there are safety precautions built into the career field that prevent any unnecessary risk, such as not working on towers when winds are observed higher than 25 knots. This sometimes can cause the work to maintain and fix these systems tedious, often having to be rescheduled until the weather subsides.

"We've been here for nearly a month," said Staff Sgt. Carlos Salinas, cable and antenna theater maintenance team member. "We have performed either inspections or some kind of maintenance on 14 towers so far."

Although having to be on temporary duty to perform most of their job responsibilities can be tough, the capability these Airmen provide to the Air Force and its partners is invaluable.

"Without the cable and antenna theater maintenance team and this location, we would lose a significant portion of the high frequency coverage for Europe and the Atlantic crossing," said Staff Sgt. Chet Warren, a 422nd Communications Squadron ground radio member from RAF Croughton. "Any friendly country in the United Nations can use our radios, which means these guys maintain antenna systems that support not only the Air Force but also much of the world's communications."

The 1st CMXS is part of the 435th Air and Space Communications Group, one of the three groups that make up the new 435th Air and Ground Operations Wing headquartered at Ramstein Air Base, Germany.
at 9/23/2009 06:59:00 AM